Prepare For The Robot Invasion 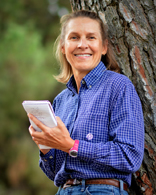 Within a few years, California farmers will have to pay $15 an hour minimum wage and time-and-a-half overtime for anything over eight hours under new regulations. That is, if they can even find reliable workers.

A number of producers have already turned to robotics to replace hand-hoeing crews in specialty crops, which have a higher per-acre value and a lack of herbicide options compared to cotton.

But manufacturers of some robotic and self-driving cultivators say it’s only a matter of time before row-crop operators adopt their technology. They also point to herbicide drift and increasing herbicide weed resistance for fueling interest in robotic cultivation.

About a half dozen manufacturers gave a glimpse of the future at the University of California’s third annual Drone/Ag Tech Field Day held recently at Bowles Farming in Los Banos, California.

California-based FarmWise, which is working on a self-driving autonomous weeder, is partnering with a number of Central Valley cotton growers this summer to collect data. Among those is Bowles Farming. FarmWise’s machine, which resembles a large orange box with wheels that straddle the plant bed, uses artificial intelligence and machine learning to differentiate between crops and weeds. 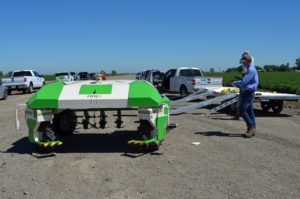 But to do so, FarmWise must first run it in fields with varying crop sizes, varieties and weeds to collect large amounts of data on which the software can base decisions. The company is further along perfecting its autonomous weeder for leafy greens and cool-season vegetables. These crops lend themselves to robotic weeding because they are transplanted, resulting in uniform stands. Direct seeding, on the other hand, may produce uneven stands.

Dino, the all-electric autonomous prototype from French manufacturer Naïo Technologies, uses GPS guidance to navigate within field boundaries. Users set how close they want the cultivation from the plants. Dino then uses optical cameras to detect plant rows and cultivate on both sides.

Steve Fennimore, a University of California Cooperative Extension weed specialist in Salinas, California, has conducted extensive studies with the Robovator from Danish manufacturer F. Poulsen Engineering. A number of large California vegetable growers on California’s Central Coast are now using the rig, which is towed behind a tractor.

Each cultivation unit has optical cameras and blades that undercut plants in the field. Based on imaging, the machine recognizes patterns, such as plant spacings, and picks up the blades when a crop plant is present, replacing them in the soil in between. The machine isn’t intended to replace herbicides entirely but instead help with labor, Fennimore says.