Be Ready For Armyworms

Will cotton avoid the march of fall armyworms that lay siege to hayfields, turf crops and vegetables this summer? From Texas to Arkansas and down to Florida, the mild winter and frequent rainfall have created a favorable environment for a population explosion of this pest. 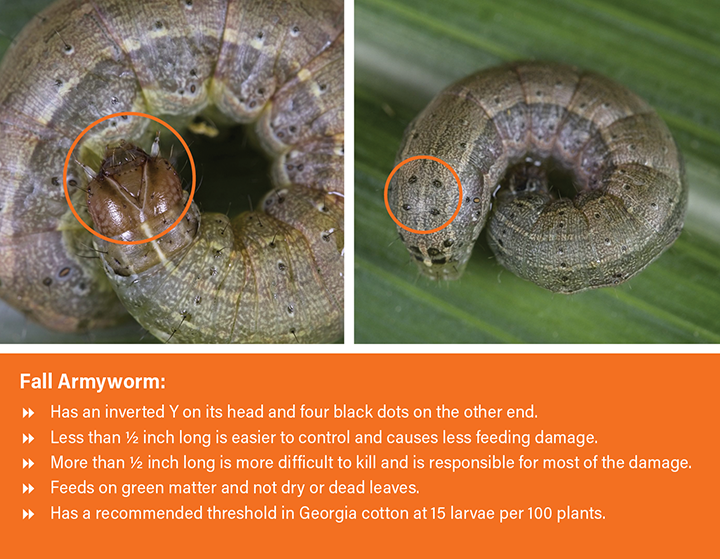 Alabama Extension entomologist Katelyn Kesheimer says, “The frequency of rain creates a favorable environment for fall armyworm eggs and larvae to survive in large numbers. It also creates lush, green fields that attract armyworms. In some cases, producers are unable to access fields for control because of excess water.”

The same conditions have played out in Texas and Florida.

Texas A&M AgriLife Extension forage specialist Vanessa Corriher-Olson has been inundated with inquiries about fall armyworms after dry conditions were followed by a cool front and rain. “I spent all of Friday taking calls on armyworms. The entire day.”

In Florida, wet fields have prevented timely hay harvest or insecticide applications, allowing the population to build much faster than normal.

“Typically from mid-June through early July, most farms harvest their first cutting of hay. That has not been the case this year, so the worms have had ample opportunity to feed and mature,” says Doug Mayo, University of Florida Extension agent for livestock and forages covering the Panhandle. “So not only has the regular rainfall prevented field work, and hay harvest but it has also allowed the armyworm population to swell exponentially.”

“All of the three-gene Bt cottons — Bollgard 3, TwinLink Plus and WideStrike 3 — still provide very good control of fall armyworms. The two-gene WideStrike, because it includes both the Cry1Ac and Cry1F genes, also provides very good efficacy against this pest.
“The two-genecottons Bollgard II and TwinLink are not quite as efficacious, and we see a little drop in control.”

As hay is harvested and other green matter dries out, fall armyworms will come looking for something fresh to eat, and cotton may eventually be on the menu.

As Roberts reminds producers, “None of the cotton varieties are immune to caterpillar pests, so we still need to scout and use good integrated pest management practices.”

A Warning To Be Ready

In any given year, multiple generations of fall armyworms occur. With the early and explosive start, and until weather conditions change, producers can expect this pest to keep reproducing. Larvae are the damaging stage but do not eat as much for the first 10 days.

At this stage, they are small and easier to control. The last four days before pupation is when their appetite ramps up and they are most damaging to crops and difficult to control.

Scouting is the best way to find armyworms in the beginning of the larval stage. A sweep net should be standard equipment for scouts and producers. The threshold for Georgia cotton is 15 larvae per 100 plants.

Caterpillars that are less than ½ inch long are easier to control and cause less feeding damage. Caterpillars more than ½ inch long are more difficult to control and will likely need higher insecticide rates. A list of products can be found in the Georgia Pest Management Handbook on the UGA cotton Extension website. Scouting for fall armyworms should be ongoing until defoliation.

Corriher-Olson says, whether in forages or row crops, it is critical that producers have pesticides ready for applications as soon as armyworm numbers near the recommended threshold.

“The big question is how long will they be a problem, and the answer is until the first killing frost,” she says. “Armyworms are not a ‘spray once and they won’t be a problem’ kind of thing.”