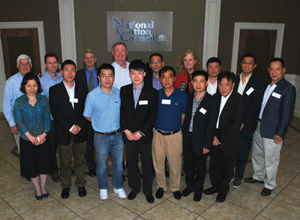 No matter what challenges might exist between the U.S. cotton industry and China, one fact remains clear. Each side needs the other in this crucial economic relationship.

That was made obvious last month when textile mill executives from China and Hong Kong participated in a week-long tour of the U.S. Cotton Belt. Represented in the group were eight Chinese mills and two Hong Kong mills. The tour, sponsored by Cotton Council International, gave the visitors a close look at U.S. cotton production, processing and marketing as well as opportunities to meet key U.S. cotton exporters.

During the 2012-13 marketing year, the mills represented on this tour collectively consumed about 2.2 million bales of which about 990,000 (or 44 percent) will be U.S. Cotton.

For many of the mill executives who have conducted business with Memphis cotton merchants for several years, it was an opportunity to renew old friendships.

That was particularly true for Pat Woo, director of Central Textiles of Hong Kong. His family, including his father Alex, has purchased U.S. cotton for decades.

“I am very familiar with the U.S. cotton industry, but I learn something every time I participate in a tour like this,” he says. “I have said this many times before, but China and the United States need each other. We are talking about the world’s biggest cotton exporting and importing countries.”

Woo is particularly impressed that the U.S. cotton industry continues to be proactive on important issues such as lint contamination, permanent bale identification and sustainability.

“It just shows how united the U.S. cotton industry is in dealing with such crucial matters,” he says.

Central Textiles recently celebrated its 60th anniversary and has a long history as a family-owned company based in Hong Kong. It is a spinning and weaving operation that primarily manufactures denim for numerous American brands. Annual cotton consumption is between 170,000 and 180,000 bales.

Woo and the other mill representatives on the tour understand the concern of the United States and other cotton-exporting countries about China’s reserve system, which has now reached the 58 million bale level.

“Those of us who are textile manufacturers don’t really have any control over that situation,” he says. “It’s strictly a government decision and out of our hands. But we know that everybody wants to talk about this.”

One of the reasons why Woo has a special relationship with the U.S. cotton industry is the fact that his mill was the first Asian manufacturer to install Cotton Incorporated’s highly successful Engineered Fiber Selection (EFS) system.

“The system has helped make our quality very consistent,” he says. “Our customers like it a lot. This is another example of how the U.S. cotton industry makes a difference for all of its customers.”

One of Woo’s U.S. merchant friends, Kenny Jabbour of Memphis, echoes those comments.

“This helps both sides when you can meet and spend time with each other,” he says. “We can talk about problems and exchange ideas. Our industry always does a great job when it hosts groups like this.”