Editor’s note: As Arizona Farm Bureau nears the 100-year mark, Farm Bureau staff has reached out to long-time farm and ranch families to tell their stories about farming and ranching in this desert state. They now have profiled 119 families, and a great many of them are Arizona cotton farmers. Search on azfb.org for “Meet Arizona Agriculture” to view the series of articles.

Once reliable irrigation systems were built, Phoenix became a true agriculture center in the early 1900s. Farmers, like Robert “Bob” Meier, could farm in the heart of Phoenix managing crops such as citrus, other fruits and cotton.

The Meier family, beginning with Robert’s father, Bill, had always farmed hundreds of acres in what we’d consider close to the heart of Phoenix, much of it on land that now has houses instead of crops. Father and son grew Pima cotton, short-staple cotton, sugar beets, grain and more. Bob also tended beehives and sold citrus, mesquite and cotton-blossom honey.

I recently met up with Kathleen Meier in the home the Meier family built in Phoenix in the 1950s. From Cleveland, Ohio, Kathleen came to Arizona with her family when her father started a restaurant and an air-conditioning business.

Nearly 90 years old, Kathleen has spunk and reminds me of so many farm and ranch wives who are partnered with their husbands in the business. She and Bob met on a blind date when both were attending the University of Arizona in Tucson. Little did this city girl know she’d soon begin the life of an Arizona farmer.

A Passion For Agriculture

“I love my tractor,” she says. “I won’t give that up. I did just hire someone to do all my yard work for the first time [on a spread that’s three-quarters of an acre]. But I still got my tractor and when I feel like it, I still love getting on it and driving around.”

And though Robert John Meier passed away in March 2017, Kathleen can speak to their days farming and ranching as if they happened just yesterday. “We tried everything. We also raised bees, eggs, Charolais cattle and harvested honey.”

Bob had a passion for Arizona agriculture. He loved his time on the farm and the wonderful friends he met through the farming and ranching industry. This includes Farm Bureau where he served as membership chair for many years with the Maricopa County Farm Bureau. In fact, he invested countless years with the Farm Bureau and served on the University of Arizona Alumni Association board.

Bob was devoted to his church — Bethany Bible — and mission work, traveling to Russia, Turkey, Scotland and Iceland with Campus Crusade for Christ.

■ Tell me the story of how the Meier family began farming and a bit more background on the family in general.

Bob’s father, William Meier, came here in the 1920s, starting in Tempe. He was one of the first farmers in the valley to farm sugar beets. He even invented a thrasher machine. I imagine William’s father farmed in Colorado since the family’s recent history is from there.

However, I am a big city girl. The only thing I know about agriculture was what I learned after I married Bob. At the University of Arizona, I took ag 1 and ag 2 and animal husbandry 1 and 2 just to become more acquainted with what it takes to be a farmer.

Bob also studied at UA and got a bachelor’s degree in agricultural science.

To go way back, Bob was born Jan. 12, 1925, in Alhambra, Arizona, to Ida and William Meier. From his earliest years, he worked on the family farm and kept an eye on his three sisters: Helen, Lucille and Sally. He attended North High, graduating in 1943.

We raised two daughters, Sally and Robin, in the Royal Palm district of Phoenix. We were active with 4-H, quarter horse shows and our church.

He was “Bobo” to his grandchildren: Josh, Tyler (Randi), Kristin (Kelly) and Andrew (Shannon). He so loved his seven great-grandchildren: Jack, Raegan, Luke, Kate, David, Caelyn and Grace. [Kathleen was Kiki to the grandchildren.]

In fact, the grandchildren were convinced BoBo could fix everything.

“He had the patience and ability to do anything,” says daughter Sally Colace. “Mom has a Jeopardy-type mind and visits with the grandchildren about everything, including sports. She’s well read and will talk to anyone.”

■ What other crops, besides cotton and citrus, did you farm? 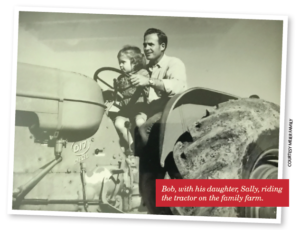 We farmed a lot of different things, including all kinds of vegetable crops. You name it, we have farmed it. We also had chickens and Charolais cattle and grew sugar beets for seed. Our farm was located between Indian School and Camelback. We lived on the farm before we moved to Phoenix.

■ What farming practices are a highlight to you?

Bob and his father, Bill, would put together whatever things they needed to get the job done. He was really good with baling wire and duct tape if it called for it. He never saw a piece of string he didn’t think he could use.

■ What else was the Meier family farm involved in that no one really knows about?

We also raised bees and harvested honey. Bob had a milk route when he was 8 years old. Bob once headed out the door saying,

“The pulling chains [used during a difficult delivery] are in the pantry,” since one of our mares was about to foal. I went into the living room and cried, pulled myself together and told myself to be ready if the situation called for it. I had never used the pulling chains before. It turned out I didn’t have to use them.

I also happen to be an avid gardener, and I love my friends. [Life lesson I learned interviewing Kathleen: Always make friends with people younger than you.]

■ What impressed you about your husband’s farming?

Probably that he was the most honest person I have ever known.

■ What were some of the highlights of joining a farming family?

Well, we never got to go on vacations, and Bob wouldn’t come home at times because he would have to take care of irrigation. If the night irrigator didn’t show up, he’d have to do the job. He’d drive to the other end of the field, take his boots off, lie down in the furrow with his feet forward toward the flow of water. A few hours later, when the water washed over his feet, he knew the water was at the end of the row.

■ What’s an interesting hobby Bob took part in that most people don’t know about?

Bob was quite the collector; he never found a string he couldn’t use.
Daughter Sally remembers her parents waking her up in the middle of the night to watch a foal being born. “It was special, magical.”

Plus, “Both my parents loved to do yard work together. Dad at 92 before he passed away and mom at 88. They were still doing it together. And Mom up until recently was doing it on her own.”

■ What kept you as Farm Bureau members?

Well, Bob loved agriculture and it was in his blood. He loved what Farm Bureau stood for and believed the organization was a protector of the industry. [The Meier family has been Farm Bureau members for decades — 76 years. Their insurance agent, Steve Goucher, says Bob once told him he became a Farm Bureau insurance client at 16.]

■ How is the next generation of the Meier family staying in agriculture?

One of my two girls married a farmer whose operation is in California. They farm an assortment of different things. They met while in college at the University of Arizona.

■ How will the next generation of agriculturalists have to operate?

They will have to get bigger. The cost to farm keeps getting more expensive.

■ What is the best business advice you have ever received or been given?

Stay on the right path. Be honest and operate with integrity.

You talk to the family and you hear the same character traits about BoBo: Gentle. Kind. Loving. Humble. “My dad was a beautiful picture of someone who loved God and people,” says Colace. “I am so proud to call him my father.”

Julie Murphree is the Arizona Farm Bureau outreach director. Contact her at 480-635-3607 or juliemurphree@azfb.org.