Trip To Montana – A Special Experience

Can a cotton producer learn anything valuable after spending a week in Montana? To the uniformed outsider, that would be a logical question. For participants in this summer’s Multi-Commodity Education Program (MCEP) tour, it all makes sense now.

This program began in 2006 and is coordinated by the National Cotton Council’s Member Services and supported by the Cotton Foundation with a grant from John Deere. The week-long trip serves many purposes. It gives the visiting group a chance to observe agronomic practices as well as gain a better understanding of issues in another region. An additional benefit is building alliances among American farmers from different parts of the country. Those alliances have proven beneficial during years when a Farm Bill is being debated in Washington. 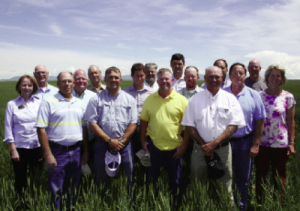 It was an opportunity for learning when this cotton group visited Montana.

Gibson, who has managed the program since it started eight years ago, says the goodwill and information exchange generated through the years continues to be significant. This year’s trip was no exception. “Our cotton farmers certainly enjoyed seeing so many parts of Montana agriculture,” he says. “Plus, I think some important friendships were made on this trip that will last a lifetime. You can’t put a pricetag on how important that will be down the road.”

Most of the cotton contingent had never visited Montana, and many probably had a preconceived idea of what they might see. The diversity and scope of the state’s agriculture industry seemed to make the biggest overall impression. And even though nobody will ever grow cotton in Montana, the visitors could certainly relate to grain and cattle farming operations.

I didn’t know what to expect, but it became a wonderful learning experience from start to finish.

Such was the case for Texas High Plains cotton producer Chris Hirt. He was particularly interested in how Montana farmers deal with their water issues. But, more than that, he appreciated the chance to communicate with ag representatives from another state. “I am like others in our cotton group,” he says. “I didn’t really know what to expect, but it became a wonderful learning experience from start to finish.”

Two other cotton producers – David Cochran of Greenwood, Miss., and Neal Baxley of Mullins, S.C. – echoed those comments. Cochran says it is essential that regional ag associations work together, and he believes the Montana trip helped in that process. “I was completely impressed by the experience,” he says. “And I would highly recommend that my fellow cotton farmers take advantage of this opportunity if given the chance.” The Mississippi producer says agriculture’s voice can be strengthened in Washington by programs such as the MCEP. Baxley says he didn’t know much about Montana, but he is glad that he could observe farming practices in a state that differs so much from South Carolina. “I’ve spent a lot of time telling my farmer friends about Montana,” he says. “Everybody was interested in what I saw. It was so interesting to see how farmers in that part of the country produce their crops.”

Whether it was viewing equipment, grain elevators or standing in an expansive wheat field with snowcapped mountains in the background, it was hard not to be impressed with the fourth-largest state in the country. Perhaps Lola Raska, executive vice president of the Montana Grain Growers Association, summed it up best when reviewing the week’s numerous activities. “It was a mutually beneficial experience for Montana agriculture and this cotton group,” she says. “We both learned something, and now we have made some wonderful new friends in the ag community.”