‘Silver Lining’ Emerges On The Heels Of Adverse Weather

[highlight]Editor’s note: Cotton Farming editor Carroll Smith went into the field this fall to capture the story of farmers’ experiences with the new Deltapine Bollgard II XtendFlex varieties. Following is her special report.[/highlight] 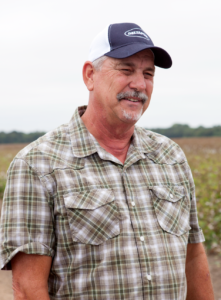 In Milam County, Texas, the Beckhusen family has made its mark in cotton since the late 1920s. Garrett Beckhusen farmed cotton on the hills of the central Blacklands before the flood plains and watershed dams opened up the bottomland next to the Little River.

His son, Wilburn, officially joined the operation in 1947 and bought the Modern Gin in Buckholts, Texas, in 1948. At one time, six gins operated in this small community. Since competition was intense, Wilburn installed new gin equipment in the 1950s. The introduction of mechanical harvesting equipment also brought about change.

Whereas farmers used to bring their cotton to the gin in the back of pickups or in small, two-wheeled wagons, they now needed trailers. In the mid-’60s, Wilburn invested in about 200 trailers and offered them to farmers free of charge as long as they brought their cotton to his gin.

This innovative spirit carried over to Wilburn’s son, Jay, who now farms about 4,500 acres of cotton, soybeans and grain as Little B Farms in the Little River bottomlands. To make the best cotton crop possible, Jay embraces new technology, especially when it comes to variety selection.

“Since the late 1920s, a Beckhusen has grown cotton every year even though most farmers in the area have moved to grain crops,” Jay says.

Bollgard II XtendFlex Technology
This past season, he was eager to try Bollgard II XtendFlex varieties. In anticipating the new XtendiMax herbicide with VaporGrip Technology, a proprietary technology from Monsanto that can help significantly reduce dicamba volatility compared to commercially available dicamba products, Jay wanted to figure out which variety worked best on different soil types.

Even though Jay is a self-professed, die-hard cotton farmer, Mother Nature put him to the test in 2016. He planted DP 1646 B2XF on two of his fields — one irrigated and one dryland. Just as the cotton was coming out of the ground, a 10-inch rain fell on April 15 and flooded his fields.

“The cotton stayed underwater for 24 hours,” Jay says. “I thought it was ruined, but 90 percent of it came up and survived. We had to patch in a few spots where the water stood for a week, but overall, DP 1646 B2XF showed tremendous vigor.”

On May 20, Mother Nature dropped another 6 inches of rain in one hour. The crop went under again…and still survived.
“At this point, we needed some heat units so the cotton would start fruiting,” Jay says. “We went for a long period without any moisture, temperatures reached 100 degrees and the cotton started performing like it was supposed to.”
Because DP 1646 B2XF tends to be a tall, growthy plant, Jay applied about 20 ounces of plant growth regulator. “We only made one PGR application,” he says. “That put the brakes on it, and the timing was just right.”

“When resistant weeds started coming through, I applied Liberty. I had to touch up twice because the weeds are hard to kill with Liberty when they get tall. We also got out the hoes to hand-chop resistant sunflowers and then carried them out of the field to avoid leaving any seed on the ground. This year, dicamba should knock out any resistant weeds that show up.”

In addition to being challenged by glyphosate-resistant weeds, some areas of Texas — including Little B Farms — experienced heavy worm pressure in 2016.

“Although we had worm pressure, the Deltapine varieties with Bollgard II technology fought through it,” Jay says. “We didn’t have to spray.”

The ‘Silver Lining’
As August approached, Jay’s cotton appeared to be on track as he made preparations to defoliate the crop. However, Mother Nature had one more trick up her sleeve. The Texas farmer says his area typically receives about an inch of rain in August. That month in 2016, an unusual, unexpected weather event resulted in 6 to 8 inches over a week’s time. The storm eventually moved on, but the subsequent 12 to 18 inches of regrowth, in addition to the bottom leaves, required an extra shot of defoliant in preparation for harvest.

If every cloud truly has a silver lining, for Jay Beckhusen it came in the form of cotton grades on DP 1646 B2XF.

“I knew the yield was off, but the quality grades really got my attention,” he says. “The dryland DP 1646 B2XF is bringing 47 cents in the loan compared to the other varieties, which are averaging 41 cents. That’s 6 cents more just on value. The loan value on my irrigated DP 1646 B2XF is 52 cents average — a nickel more than the dryland. That’s strong cotton.”

When asked what drives him to continue the family legacy of planting cotton every year, Jay says, “It’s in my blood, and I enjoy it. Year in and year out, cotton is the crop that makes us money.

“And I intend to plant DP 1646 B2XF and DP 1522 B2XF again in 2017. I look forward to being able to spray the new XtendiMax herbicide with VaporGrip Technology.”