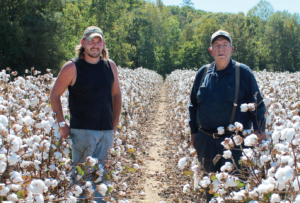 Cody Ewing, left, farms mostly cotton and peanuts with his grandfather, Jerry Marsh, in Blount County, Ala. The variety featured in these photos is PHY 444 WRF. Photos by Freida Horton

Cody Ewing farms with his grandfather, Jerry Marsh, in Blount County, Ala., between Huntsville and Birmingham.

Marsh began farming cotton many years ago, ventured into soybeans in the 1980s, and later tried his hand at fruits and vegetables. Ewing helped out on the farm from the time he was old enough to drive a tractor.

“My mom planted 700 acres of soybeans while she was six months pregnant with me, so I was literally born with a love for farming,” Ewing says.

In 2007, he nearly lost his life in a fireworks accident, and after an extensive recovery tried to rejoin the workforce during a severe economic downturn. At that time, his grandfather was truck farming, so Ewing went to work for him as a farm hand. In 2012, the grandfather-grandson team decided to try row crops again and started with peanuts and soybeans. Ewing planted his first cotton crop in 2014, and today the pair grows mostly cotton and peanuts.

The photo featured on the cover of the December issue of Cotton Farming shows one of their skip-row fields of PHY 444 WRF just prior to the 2016 harvest. And the subsequent yield numbers are impressive.

“We knew it was pretty good but never imagined it would yield to the extent that it did. The overall average yield for the farm last year was 3.744 bales to the planted acre and 2.496 bales to the acre of ground.”

Although words describe and document, photos create a “seeing is believing” experience. Through this pictorial, share the excitement and pride of these two Alabama farmers as they gather “white gold” during the fall of 2016.

Click on a photo below to enlarge, and/or view all. 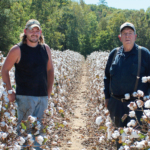 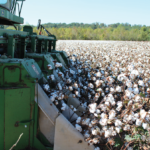 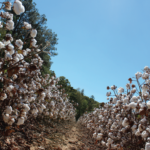 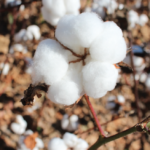 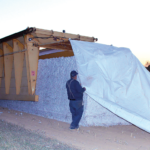