[highlight]Editor’s note: Cotton Farming editor Carroll Smith went into the field this fall to capture the story of farmers’ experiences with the new Deltapine Bollgard II XtendFlex varieties. Following is her special report.[/highlight] 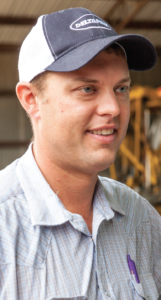 Texas cotton producer Aaron Martinka, who grew up in Williamson County, recalls helping his dad, Laddie, on the farm by tromping trailers and hauling cotton to the gin as a teenager. In 2005, fresh out of Texas A&M, he had an opportunity to pick up some ground on which he grew corn and wheat since it was not particularly suited for cotton.

“I consider this my first crop, a chance to ‘get my feet wet,’” he says. “In 2008, I added better land to the operation and started growing cotton. A few years later, my brother, Adam; cousin, Kyle; and I formed AKA Farms and have grown cotton every year since in Milam, Williamson and Bell counties.”

Today, the young men grow about 3,000 acres of cotton, corn and wheat in the Texas Blackland Prairies.

After hearing reports about the outstanding yield and quality associated with
DP 1646 B2XF, Aaron decided to plant the newly commercialized variety on 300 irrigated acres and 150 dryland acres last year.

“I also was interested in DP 1646 B2XF because it is a medium-full variety,” he says. “I like to plant that maturity to take advantage of the full season and try to capture yield. But the biggest attraction was the quality. In today’s market, I believe a lot of value lies in producing high-quality cotton.”

“We planted in April and before the cotton emerged, a 4- to 5-inch rain fell,” he says. “Although one of the irrigated fields of DP 1646 B2XF was completely flooded, I didn’t have to replant. The seed was able to push through the crust, which shows how vigorous DP 1646 B2XF is.

“The saturated soil kept growth in check until the middle of June. I thought this would be a late crop, but the cotton evened out after getting a lot of heat units during June, July and August. I also noticed that DP 1646 B2XF fruits up early and sets positions better than some of the other varieties.”

Weed Control Strategy
The three most troublesome weeds AKA Farms has to contend with in cotton are pigweed, grasses and broadleaf sunflower. Although glyphosate-resistant pigweed is still not a huge problem, the approval of XtendiMax herbicide with VaporGrip Technology, a proprietary technology from Monsanto that can help significantly reduce dicamba volatility, comes just in time, Aaron says.

“We have a few fields where we are beginning to see quite a bit of glyphosate resistance,” he says. “Now that XtendiMax with VaporGrip Technology has been approved, we can manage those weeds with relative ease. My burndown program is still ‘cold steel.’ There is not a weed resistant to that yet. In 2016, I put out a yellow herbicide early in the spring, and then plowed before planting. I applied Roundup PowerMAX and Warrant behind the planter to get down a residual, then came back with another shot of Roundup. This year, when the cotton is at the four-leaf stage, I will apply XtendiMax with VaporGrip Technology.”

Yield, Quality Hold Up
Even though Aaron’s two irrigated fields of DP 1646 B2XF experienced adverse weather at the beginning and the end of the season, he was pleased with the yield and quality, considering the circumstances. One field averaged 3 bales per acre and the other averaged 3.3.

“The field that averaged 3 bales has waterways that run through it, so there is no production in those areas,” he says.

“And a lot of spots did well over 3 bales to achieve that average. I also saw a lot of five-lock bolls. And that particular field of DP 1646 B2XF brought 56 cents in the loan. It was just good cotton to start with. I was really impressed with the quality.

“Based on my one year’s experience, I believe ‘strong cotton’ is a good description of DP 1646 B2XF. It has strong vigor, strong emergence, and strong yield and quality. So far, I like what I see.”
When asked what drives him to continue to plant cotton every year, Aaron says it’s the risk-reward factor.

“Unlike corn, you have to constantly manage cotton,” he says. “The reward comes at harvest when your crop serves as an indicator of the amount of work you put into it throughout the season.

“With the many challenges cotton farmers face today, we want varieties that provide good weed control technology, insect control technology, high yields and good quality. I think DP 1646 B2XF offers all that in one package to help us succeed in the cotton business.”