2019 Southeastern Ginner Of The Year Named At Annual Meeting

Don Daily with Dexter Supply Co., also known as Modern Gin Co., was recently honored as the 2019 Southeastern Ginner of the Year at the Southern Southeastern Annual Meeting in Savannah, Georgia.

Southeastern Cotton Ginners Association President Drake Perrow presented the award and shared these remarks about Daily.
“The 2019 Ginner of the year literally grew up in this business — something that can’t be said for a lot of folks ginning today. In fact, he has shared his stories of going to the gin show in Atlanta when kids probably shouldn’t have been going to the gin show.

“His family has been in the ginning business for well over 100 years and at least four generations. Over the years, they have ginned somewhere between 50 million and 75 million pounds of cotton. The family gins have been powered by water, steam, diesel and electricity.

“Our recipient graduated from Waynesboro High School and went on to Abraham Baldwin Agricultural College in Tifton, Georgia. From there, he went to the ‘Loveliest Village on the Plain,’ attending Auburn University where he received his bachelor’s degree in marketing and transportation. He also was a member of the Sigma Nu fraternity.

“He began his career, not in ginning, but at Maxwell Brothers Furniture in Warner Robins and Macon, Georgia. After about a year, his father gave him the opportunity to come to the gin where he has worked for the past 44 years.

“Farmers Mill and Elevator, doing business as Dexter Supply Co., (we know it as Modern Gin Co.) is a diversified ag business handling a variety of commodities including peanuts, corn, soybeans and fertilizer, as well as housing a hardware store and cotton gin.

“Our recipient has been active in just about every organization related to his businesses. Currently, he is a delegate to the National Cotton Council and director to Southeastern Cotton Ginners Association. He has also been active in peanut and other organizations over the years.

“He has been a member of his local school board for Dublin High School and is an Eagle Scout. You’ve probably figured out this year’s Ginner of the Year is Don Daily. Don and his wife, Pam, have two children — Michael and Gayle — both of whom have joined him here today.”

California Cotton Ginners And Growers Association Announces 2020 Board Of Directors 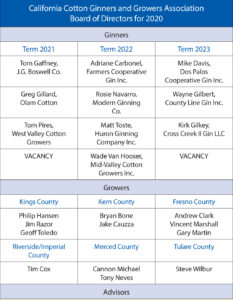 The California Cotton Ginners And Growers Association received nominations for all of the incumbents in this year’s board of directors election and did not receive any new nominations. Therefore, the current slate of incumbents was reelected at the association’s December board meeting.

On the ginner side, Mike Davis of Dos Palos Co-op, Wayne Gilbert of County Line Gin and Kirk Gilkey of Cross Creek ll Gin LLC were all reappointed.

On the grower side, Steve Wilbur from Tulare County, along with Gary Martin, Vince Marshall and Andrew Clark, all of Fresno County, were reelected. In addition, Jake Cauzza from Kern County was appointed to fill the seat of outgoing board member Jim Neufeld.

Wade Van Hooser of Mid-Valley Cotton Growers was appointed to fill the seat of outgoing board member Stan Creelman.