Keep Gin Safety At The Top Of Your List

Safety is always a topic that draws mixed reactions. I’ve written more safety articles and given more safety talks than I care to think about, but it’s something I feel is important. In the past couple of years, gins — along with many other industries — have been required to report their serious accidents directly to the Occupational Safety and Health Administration. This has led to a significant number of interactions with the agency on many levels.

Whenever there’s an incident that requires you to call OSHA, it’s never a fun situation. You’re dealing with the injured worker, sometimes their family, the hospital, workers comp and…sometimes your ginners’ association safety guy. The last thing you want to do is call someone to let him know he may want to come by and go through your business with a fine-tooth comb in the middle of all that AND it’s ginning season. In this case, it’s the law, and fines often increase when accidents are reported late.

In the first year of required reporting, there weren’t any fines charged. Now they’re well over $3,000 in most cases. We’ve seen not only larger fines for late reporting but larger fines overall. What used to be a minor infraction now feels like a major issue. And let’s not even talk about the big infractions.

What can we do about this? Well, the first thing is to do EVERYTHING you can to avoid having to call OSHA in the first place. This means using your resources (associations, insurance folks etc.) to develop and run a safety program. Make sure everyone is following it to the letter.

Cotton gins are considered agriculture by the Department of Labor. This means we can be less prescriptive and more creative in developing a program. Consider the injuries you’ve heard about — your association or insurance company can provide you with plenty — and think about how you’d prevent them in your gin. No two gins are exactly alike, so you need to make your program fit your gin.

If there’s one program or practice that everyone needs to be aware of and learn about, it’s energy control. Agriculture doesn’t have a prescriptive lockout/tagout program, but we are under an obligation to control hazardous energy. This means all forms of energy, including but not limited to electricity, air, hydraulic and potential (that is held up in the air like a tramper).

Recently in the Southeast, most of the calls to OSHA could have been prevented by a more thoroughly developed energy control program. This year, let’s see if we can all put a program in place that keeps people from getting caught in machines that should have been stopped.

Dusty Findley of the Southeastern Cotton Ginners Association contributed this article. Contact him at 706-344-1212 or dusty@southern-southeastern.org. 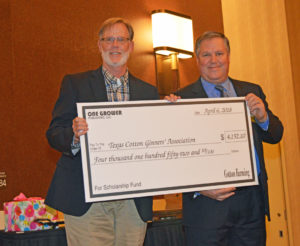 Each year, the magazine donates a portion of revenue from ad sales in the TCGA printed show program and ticket sales for the Exhibitor’s Luncheon.

“The proceeds we get from Cotton Farming magazine for scholarships at Texas Tech University are valuable in bringing future educated men and women into the cotton industry,” Williams says.

The Texas Cotton Ginners’ Association Summer Membership Meeting will be held at the Omni Frisco Hotel, Frisco, Texas, June 24-26. This hotel adjoins The Star event center, which is the home of the Dallas Cowboys. Visit www.tcga.org for more information.

“Honoring Steve Moffett as a Life Member of the Texas Cotton Ginners’ Association was truly an enjoyable event,” says TCGA Executive Vice President Tony Williams. “Steve is so deserving of this honor for all the work he has done for the cotton industry and ginners over his career at Lubbock Electric Co. It will be great to have him join this prestigious group of individuals at our annual gathering during the TCGA gin show.”