In recent years, many growers have noticed an increasing incidence of deer feeding in young cotton. There are many theories as to why this may be occurring now, relative to years prior.

The most common theories are the loss of aldicarb applied in-furrow for thrips and nematode control, major reductions in peanut acreage in the early to mid-2000s, and the resulting absence of preferred food sources during that time.

The number of deer feeding complaints in cotton has risen sharply in the last five years; however, these cases are relatively isolated to fields that regularly encounter noticeably high numbers of deer and fields in close proximity to preferred bedding habitat.

Deer appear to feed on young cotton (less than five to eight true leaves) until other preferred food sources become available. Feeding preference is primarily on the terminal bud, thus causing a loss in apical dominance (Figure 1), which results in the majority of the harvestable bolls appearing on multiple vegetative branches.

Preliminary observations suggest that deer feeding can cause severe stand loss, delayed maturity, and yield reductions in surviving plants. It is important to evaluate and quantify the effects of deer feeding on young cotton so that replant decisions can be made in cases of significant stand loss or severe yield loss of surviving plants. 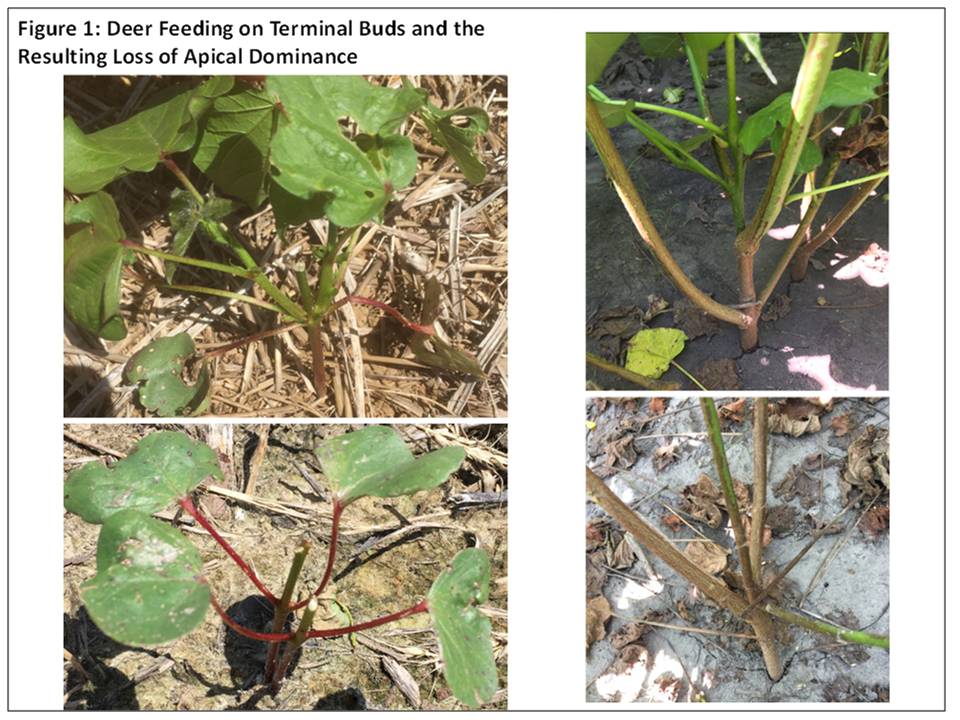 Figure 1. illustrates the common effects that deer feeding has on surviving young cotton after some time has elapsed. The bottom left photo shows where the terminal bud has been removed by deer leaving only the cotyledons. As long as the cotyledons remain intact, they will provide an energy source to later trigger the development of new vegetative branches (top left photo) within a few weeks.

These plants will most likely survive, however apical dominance has been lost (right photos), therefore growers can expect a severe delay in maturity of surviving plants, and in many cases, some degree of yield loss depending on when deer feeding occurred.

Dr. Guy Collins is an Extension Cotton Specialist in the Crop and Soil Sciences Department at North Carolina State University. He may be reached at guy_collins@ncsu.edu.