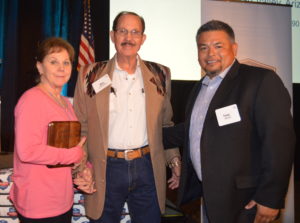 (from left) Beth and Max Koepnick of Koepnick Family Farms were honored for achieving the top yield of all One Ton Club members in 2017. They were accompanied by Bayer agronomy production manager Tony Salcido.

Despite challenging weather in many production regions in 2017, 188 producers still qualified for the FiberMax One Ton Club, which recognizes growers who harvested 2,000 pounds of lint on irrigated ground using FiberMax varieties. Of those, 30 were first-timers.

Altogether during the program’s 13-year history, Bayer CropScience has honored 1,086 cotton growers for the feat.

In presenting the honors during a recent banquet in Lubbock, Texas, Steve Nichols, Bayer head of agronomic services, compared the accomplishment to baseball.

“One Ton growers hit a home run of 1 ton per acre,” he says.

Tim Culpepper, a regional agronomist who covers Lubbock north to Oklahoma, says, “I was truly amazed with the growers who made the One Ton Club.”

In July 2017, he says it appeared cotton plants in his region of Oklahoma would retain nearly 100 percent of the bolls. But temperatures soared, causing crops to decline.

Oklahoma growers produced 1.06 million bales in 2017 on 585,000 acres, Rick Minzenmayor, regional agronomist for the Rolling Plains to Oklahoma, says, citing U.S. Department of Agriculture figures. The Sooner State hadn’t seen that much cotton production since 1933 and that was on 1.3 million acres.

Bayer also recognized a handful of growers who had leading qualifying factors. 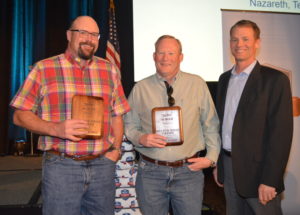 Brian and Brady Nelson, Nelson Bros. Farms, of Nazareth, Texas, had the most qualifying FiberMax acres with 540.

Max and Beth Koepnick, Koepnick Family Farms, of San Tan Valley, Arizona, had the top yield of 2,910 pounds per acre with a gross value of $1,590.11 per acre.

Larry Hancock, LKH Farming, of Ehrenburg, Arizona, had the top loan value of 55.44 cents per pound.

And three operations tied for having the most FiberMax varieties on their qualifying acres. They were Steven and Richard Archer of Lamesa, Texas; Russ and Bo Eggemeyer of Midkiff, Texas; and Kornelius Enns of Ackerly, Texas.

Banquet attendees also were entered into a random drawing for a two-year lease on a Ford F-350 Super Duty dually pick-up truck. Taking home the vehicle were Pete and Martha Friesen of Seminole, Texas.