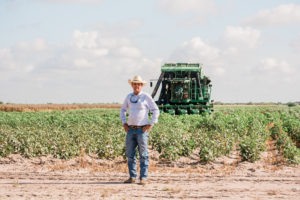 Mike England, who farms in Hidalgo County, Texas, harvested the first cotton bale of the season in the nation.

June 18 was just another day of work for farmers and ranchers across Texas, but for Hidalgo County Farm Bureau member Mike England, it was the first day of cotton harvest.

“The farm I harvested the cotton from is a dryland farm, and even though we had a really rough start to the growing season this year, it turned out pretty good,” England said. “I planted it on Feb. 4, and I actually might have had it out of the field a couple of days earlier, but we’ve had some rain. So, I had to wait for it to dry out enough to get in there and start harvesting.”

For the past 66 years, the nation’s first bale of cotton has been harvested in the Rio Grande Valley. It’s an annual friendly competition between area farmers.

It’s an honor to grow and harvest not only the first cotton bale of the season in the nation, but anywhere in the world, England said.

“There have been a couple of other times I almost had it, but this is the first time I’ve actually made the first bale,” he said. “It’s something if you’ve never done it before. First in the nation, first in the world. The Rio Grande Valley is first for a lot of crops because of our climate.”

For the seventh year in a row, the first bale of the season harvested was a FiberMax variety. This year, England’s first bale was FM 1830GLT.

Enough cotton was harvested that day to make 2 bales, which England sent to Ross Gin Co. in Mercedes.

“The first one that came in weighed 484 pounds and the second was 543 pounds,” Sally Ross, general partner at Ross Gin, said. “We’ll see which one grades, because it was a pretty wet start to the harvest.”

The wet conditions for the beginning of harvest are an extreme contrast to the bad drought earlier in the year. Because of the lack of rain during planting, Ross Gin expects to only gin about half of the acreage they saw last year.

“Our customers had about 38,000 acres of cotton last year, but this year, we’re thinking it’s going to be around 19,000 acres because so much of the cotton was zeroed out,” she said.

Once ginned, the bale of cotton will be delivered to the Harlingen Area Chamber of Commerce, where it will be certified by the Harlingen Cotton Committee.

“Two years ago, I got beat to the gin by a couple of hours,” England said. “I guess it’s a good thing to be first, but I’m more interested in the rest of the crop myself. The irrigated cotton is shaping up to be a pretty good crop if we can get it harvested. The old joke is cotton will just promise you so much and give you so little if the weather doesn’t cooperate, but when it does cooperate, it’s really something.”

The bale will later be auctioned off at the city’s First Bale Auction and Scholarship Fundraiser. All proceeds from the annual event go toward scholarships for students to attend Texas State Technical College to pursue a degree in an agricultural-related field.