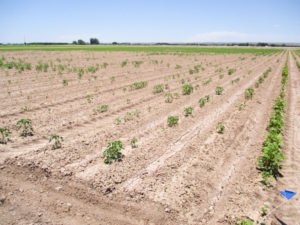 The Texas Plains cotton-growing region is not known for raising Pima varieties of cotton, but an increasing interest in the crop has Texas A&M AgriLife officials concerned the newcomer will bring with it a yield-limiting fungus.

Fusarium wilt of cotton race 4, known as FOV4, has had a very limited impact on Texas cotton so far. In 2017, AgriLife personnel first confirmed its presence in at least 30 fields in two Far West counties – El Paso and Hudspeth.

The effects of the disease can be seen as large, bare areas in fields, as a result of seedling death earlier in the season.

“For many years, most of Texas’ Pima cotton was grown only in these two Far West counties, but this year, there has been expansion of Pima acreage outside of this area, notably in the South Plains and High Plains,” said Dr. Thomas Isakeit, Texas A&M AgriLife Extension Service plant pathologist, College Station.

Dr. Cecilia Monclova-Santana, AgriLife Extension plant pathologist, Lubbock, said while the acres are not widespread, there have been more and more producers in the counties surrounding Lubbock and north into the High Plains planting Pima cotton.

“So far, it’s still just on a farmer-to-farmer basis, so there’s not a large amount here yet,” Monclova-Santana said. “These farmers are deciding to go with Pima because it has a better price in the market, and they already have the equipment that works with it.”

“Our concern is the potential introduction of FOV4 to larger cotton production areas such as the South Plains and High Plains via seedborne contamination of susceptible Pima varieties,” Isakeit said. “Our strongest recommendation in the past has been to never plant seed originating from the El Paso area. Additionally, growers should be wary of planting seed produced in other areas where FOV4 occurs.”

When FOV4 was found in California’s San Joaquin Valley in the early 2000s, it spread quickly throughout the area. The pathogen is seedborne and the saving of seed from plants grown in infested soils, as well as the planting of such seed in other fields, contributed to the expansion of the disease in the El Paso area.

“Once FOV4 is introduced into a field, it becomes a permanent resident,” Isakeit said. “Unlike other races of Fusarium wilt, which are already in Texas, FOV4 is more adapted to different soil types and does not require root knot nematode infestation to cause disease. FOV4 is a threat to all cotton production areas of Texas.”

In the El Paso area, growers have switched to more resistant varieties of Pima, he said. Upland varieties are also planted.

“We are encouraging producers to still not buy anything from around El Paso,” Monclova-Santana said. “This year we are trying to stress everyone to report if they see something unusual so we can catch it early. If they will send samples, we can screen for it.”

A concern is if producers are not looking for FOV4 in their fields, the disease might take a longer time to be noticed.

“We have to protect the cotton industry in the area, which is No. 1 in the nation,” she said. “The issue with FOV4 is the way it spreads. We have to take extreme measures to prevent it from getting established or we can’t contain it. The services are available to get it identified and contained quickly.”

She said Texas A&M AgriLife has a large team working to monitor the situation, because in some cases, a producer could lose up to 60% of a field to just this one disease.

“This year, we tested 72 commercial Upland cotton varieties for susceptibility to FOV4 in an infested field in El Paso County,” Isakeit said.

All the varieties had some level of seedling disease, which ranged from 8% to 58% post-emergent damping-off. A lab analysis of samples of the dying seedlings showed that FOV4 was the exclusive pathogen; none of the samples yielded more common and treatable cotton pathogens such as Rhizoctonia solani and Pythium species.

“This finding is a warning for other areas that FOV4 can still be a problem with Upland varieties,” Isakeit said. “Although research is ongoing to identify resistance in cotton germplasm, the best control is to prevent the introduction of the pathogen.”

Kay Ledbetter is a communications specialist for Texas A&M AgriLife Research. She may be reached at skledbetter@ag.tamu.edu.