As the managing partner of Lee Farms, Lee raises cotton, corn, peanuts, small grains, hay, pecans and cattle in Terrell, Lee, and Sumter counties. He also owns and operates McCleskey Cotton Co., a ginning and warehousing operation with locations in Bronwood and Albany. His gin is one of the owners of Chickasha of Georgia.

Lee is involved in multiple agricultural businesses. He owns RCL Flying Service; LGT LLC; McCleskey Saw and Machine Co. LLC; and Adela Logistics, all of which support local growers and their products. Prior to focusing on these closely held businesses, he was a vice president with McCleskey Mills Inc., a peanut shelling company in Smithville, Ga.

An active U.S. cotton industry leader, Lee has been a NCC producer delegate since 2003 and served on the NCC’s Board of Directors in 2015. He also served as vice chairman of the American Cotton Producers in 2014 and currently is a director of Cotton Incorporated. The Georgia farmer has been involved in regional, state and local organizations as well.
Lee, who attended Abraham Baldwin Agricultural College, has three sons — Ron, Chandler and Neil — all of whom are actively involved in the family businesses. He is a member of Bronwood Baptist Church.

Leaders Inducted Into Louisiana Hall Of Distinction
Two farmers and a forestry leader have been inducted into the Louisiana Agriculture Hall of Distinction, which honors those who make extraordinary contributions to Louisiana’s agriculture industry. Mayther Ray Young of Wisner in Franklin Parish, Buck Vandersteen of Alexandria and the late James Graugnard Sr. of St. James were inducted on March 2 during a ceremony at L’Auberge Hotel in Baton Rouge.

After graduating from both Louisiana Tech and Louisiana State University, Young established his own farm, which he operates with his son, Jesse. Young pioneered no-till technology now used on farms throughout the South. He is also a successful and well-respected crop consultant.

“In the alternate universe of California water, we can have floods, full reservoirs and a huge snowpack and still not have full water supplies. It boggles the mind,” Wenger says.

“Operation of our water system remains out of whack. We need to continue efforts to improve and expand the system. In Congress, passage of the Water Infrastructure Improvements for the Nation Act last year marked an important step in addressing the system’s inadequacies. Congress must now follow through with measures such as Rep. David Valadao’s Gaining Responsibility on Water Act, which would offer longer-term ability to store and move water.”

Wenger says farmers and ranchers will also press Congress to modernize endangered-species laws “to balance the goals of environmental restoration with the ability to provide the resources needed to grow food and farm products.”

At the state level, he says, California must move as quickly as possible to invest money from the Proposition 1 water bond into storage projects that provide the state with more ability to store water in wet winters such as this. 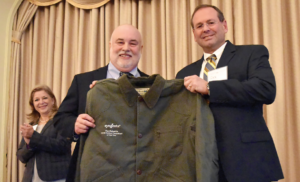 Tim Roberts Named 2016 Cotton Consultant Of The Year
Congratulations to Tim Roberts, Dyersburg, Tenn., who was named the 2016 Cotton Consultant of the Year by his peers March 3 at a special reception in his honor. Syngenta’s Rex Wichert presents the traditional green jacket to Tim as Cotton Farming publisher Lia Guthrie looks on. The CCOY award, which was established in 1981, is sponsored by Syngenta and Cotton Farming magazine.

Valor EZ Herbicide Now Available In Liquid Formulation
Valent U.S.A. Corp. has released Valor EZ herbicide, a liquid formulation of Valor SX. The company says Valor EZ is easy to mix with in-tank suspension properties and an ideal residual partner for the Roundup Ready Xtend Crop System. The new formulation helps provide growers a residual herbicide that is easy to use at all stages of the application process.

“The particle size in Valor EZ is smaller so it doesn’t settle out as quickly in the tank if you lose agitation. Because it’s suspended in the tank like the dry material, it still requires agitation, but the mixing step is more efficient for the farmer. Valor EZ is a flowable so it goes first in the mixing order. And the active ingredient is the same as Valor SX, so Valor EZ still provides excellent control of a broad spectrum of weeds, including tough-to-control waterhemp and Palmer amaranth, for four to six weeks.”

Valor EZ is available for the 2017 growing season for use on cotton and soybeans.

“It’s important for our industry to reduce the risk growers face each season and to give growers the flexibility to manage to their highest yield potential for maximum profit opportunity,” says Kerry Grossweiler, Bayer campaign manager. “The 2017 Shared Risk Program gives growers added economic confidence.”

Bayer says because FiberMax and Stoneville growers chose the right science for success and because they provide quality management, the company defends their economic sustainability with the 2017 Grower Shared Risk Program.

Kevin Corzine, who farms cotton with his brother, Justin, and his dad, Keith, in Stamford, Texas, participated in the 2017 Bayer Shared Risk Program-West. In this region, the program offered:

“Where we farm in east-central Texas is a dryland scenario,” Kevin says. “Many years we make 350-375 pounds of lint per acre on some fields. No one has ever offered us protection in that 200-399 range. In 2016, one of our fields made 350 pounds per acre and another one made 375 pounds per acre so we submitted claims for those fields. That’s why we are excited about this program.”

The hoods are designed for John Deere, Case IH and Kinze planters. Turnage says with Cotton Tail Hoods, farmers can combine both planting and broadcast chemical applications into one efficient process.

“Cotton Tail Hoods reduce the risk of drift so you can spray with confidence,” he says. “Each individual hood is mounted to each individual row unit. Because it’s not a rigid, 40-foot structure, each hood can flex and contour to the ground.”
For more information, visit perkinssales.com or call 877-293-5794.