Shawn Holladay, a Lubbock producer, was elected to the position of vice chairman for 2022.

Since 1984, Schneider has been the owner/operator of a Lake Providence-based 3,600-acre diversified farming operation in northeast Louisiana and southeast Arkansas. Dedicated to sustainable, responsible agricultural production, his primary crops are cotton, corn, soybeans, rice, wheat and grain sorghum. Schneider earned a B.S. in Business Administration from Louisiana State University. He and his wife, Renee, have three children.

The award, named for the late California industry leader and past NCC President Harry S. Baker, is presented annually to a deserving individual who has provided extraordinary service, leadership and dedication to the U.S. cotton industry.

In presenting the award, outgoing NCC Chairman Kent Fountain said Rayner has long been an industry leader and very active in the Council, serving in numerous Council leadership positions, including as a director, treasurer and as its 1999 president.

Rayner, who is a partner in A Tumbling T Ranches with his two brothers and two nephews, produces cotton, alfalfa and grains on about 6,000 acres. The partners own another 3,200 acres of farmland in California of which they lease a portion to other producers. Ron also is a former president of Farmer’s Gin, Inc., in Buckeye.

Rayner has been very involved in industry affairs. He currently serves as vice chairman of the Council’s Operations Committee and as an advisor to the Council’s Board of Directors.

A past Council Producer Information Exchange participant, Rayner always made his farm available for Council-coordinated activities such as a tour for the news media to showcase Cotton Foundation research projects and cutting-edge technology and production. 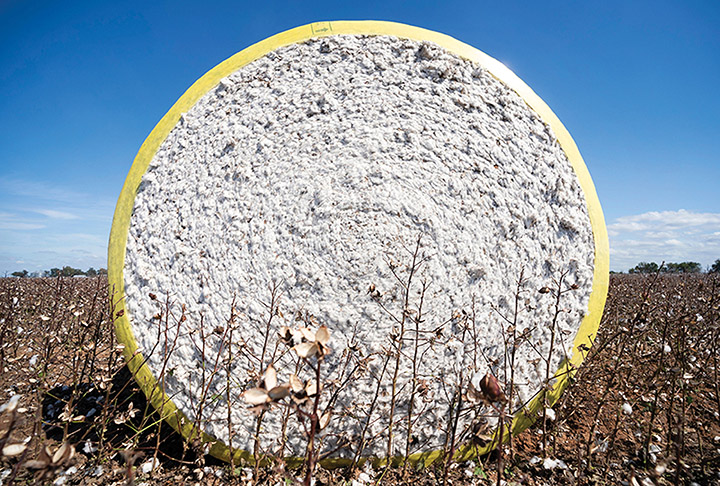 As dry conditions continue to grip much of Texas’ Cotton Belt, there are factors producers can control that will improve the chances of establishing a good cotton stand, according to Texas A&M AgriLife Extension Service experts.

According to the U.S. Drought Monitor, Texas’ Cotton Belt, which includes much of the Panhandle, Rolling Plains and South Plains, is experiencing severe to extreme drought, with large swaths of the regions entering exceptional drought status as of March 10.

Drought conditions make establishing cotton stands a challenge, even in irrigated fields. Bell and Kimura said weather is out of producers’ control, but that by improving cotton seeds’ chance of germination and establishment they can improve yield potential at harvest.

Cotton is more drought hardy than other crops like corn and sorghum, especially after a good stand is established, Bell said. This makes establishing good stands critical when conditions are not ideal for planting.

“Mistakes at planting can haunt you all season,” she said. “Cotton is a plant that can adapt, but we are looking for a good, uniform stand at the start.”

Ray Nathan Reed, a Marianna, Arkansas, cotton producer, was elected chairman of the American Cotton Producers of the National Cotton Council for 2022, during the NCC’s recent 2022 Annual Meeting.

He has served as an ACP vice chairman and on multiple ACP committees. He also is a past NCC director and has served on various NCC committees and task forces. He currently serves on the NCC’s Farm Policy Task Force and its Farm Program and Economic Policy Committee.

Pesticide use, foreign ownership of farmland and the 2023 Farm Bill are among the hot topics on the agenda for the ninth annual Mid-South Agricultural and Environmental Law Conference on June 10 in Memphis, Tennessee.

The conference is hosted by the National Agricultural Law Center and will be held in-person at the Cecil C. Humphreys University of Memphis School of Law. A livestreamed option will also be available.

The event kicks off on June 9 with a barbecue reception and networking event at the Rendezvous. The next day, attendees will hear from a variety of different experts in the agricultural and environmental law field.

“After two years of being virtual, we couldn’t be more excited to be returning to our in-person format,” said Harrison Pittman, director of the National Agricultural Law Center, part of the University of Arkansas System Division of Agriculture.

“This year, our ninth annual event includes some of the biggest issues facing the Mid-South, including the future of dicamba and other crop protection products, as well as a look at the upcoming Farm Bill,” he said. “We will also have Judge Stephen Vaden of the United States Court of International Trade kick off the program as our keynote speaker.”

Topics and speakers include:

Continuing education will be available. Learn more and register for the conference at https://bit.ly/3rSvzAd.