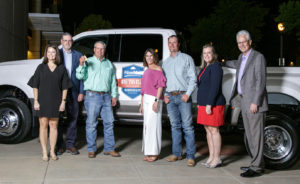 BASF recently celebrated cotton growers who achieved 4-bale or greater yields by welcoming them to the exclusive FiberMax One Ton Club for their 2018 harvest results. Ninety-one new members joined the club this year, bringing total membership to 1,181 cotton growers.

• Highest gross value: Doug and Cari Ruble of Visalia, California, earned $1,530.77 per acre on their qualifying acres with FM 2498GLT.

The FiberMax Maximizer Club, now in its third year, recognizes growers with dryland cotton fields that yield at least 1,000 pounds per acre with FiberMax varieties.

Special awards for the Maximizer Club include:

• Highest yield and highest gross value: Louis and Pamela Davis of Hawley, Texas, harvested an average yield of 1,736 pounds per acre and earned $902.03 per acre with FM 2498GLT.

“Averaging 1,000 pounds or more per dryland acre is remarkable,” Walters says. “These growers are up against the worst that Mother Nature has to offer. Despite this, they are able to take our FiberMax varieties and pair them with their knowledge and skill to achieve these excellent yields. We’re honored to recognize them for their accomplishments.”

Maximizer Club members are entered into a drawing for a Polaris Ranger XP 1000 EPS utility vehicle. This year’s winner was Ben Gwynn of Robstown, Texas. Gwynn qualified for the Maximizer Club with FM 1830GLT.

Tavium can be used preplant, at planting and early post-emergence on Roundup Ready 2 Xtend Soybeans and Bollgard II XtendFlex Cotton. The premix of dicamba and S-metolachlor offers growers a convenient new tool to manage key ALS-, PPO- and glyphosate-resistant broadleaf and grass weeds.

“Unlike all other standalone dicamba products, the multiple effective sites of action in Tavium broaden the activity spectrum and increase its overall efficacy and sustainability,” says Bobby Bachman, Syngenta herbicide product lead. “The addition of S-metolachlor with dicamba in a premix not only helps manage resistance, but it offers up to three weeks longer residual control than dicamba alone.”

This herbicide will be a valuable tool for growers in the fight against the most difficult-to-control resistant weeds by:

• Controlling weeds that have yet to emerge with residual activity

• Providing up to three weeks longer control than dicamba alone

• Working in all tillage systems and various geographies in both pre- and early post-emergence applications Tavium should be used as part of a two-pass program in order to preserve the efficacy of auxin technologies like dicamba. Syngenta recommends applying Tavium in a two-pass system, following a pre-emergence application of Boundary 6.5 EC, BroadAxe XC or Prefix herbicides in soybeans, or after Caparol 4L herbicide in cotton.

“The premix formulation provides an easy way to reduce selection pressure on dicamba, but a system of pre- and post-emergence herbicides is still crucial,” Bachman says.

Growers in the Deltapine New Product Evaluator Program will evaluate Bollgard 3 XtendFlex variety candidates this season for the Deltapine Class of 20 that show potential to raise the yield bar across the Cotton Belt.

“In every region of the Belt, there are variety candidates, nine in all, being evaluated that have shown yield potential greater than or equal to DP 1646 B2XF,” says Keylon Gholston, Deltapine Cotton Products Manager. “The Class of 20 has potential varieties that offer outstanding fiber qualities and significantly more disease tolerance than previous classes. The Class of 20, which will be introduced in December, has the potential to continue driving average yield for U.S. growers upward.”

Regionally, Deltapine NPE growers will plant a larger number of candidates than in previous seasons, including six candidates in the Southeast, Mid-South and Far West regions, and seven candidates in the Southwest region. A focus of this year’s NPE program is identifying Bollgard 3 XtendFlex varieties for each production region that offer similar or better performance than DP 1646 B2XF and other high-performing Deltapine varieties currently on the market.

Based on company breeder testing the past two seasons, here are highlights of the Class of 20 variety candidates:

“I can’t express how important the NPE Program has become to my farm and my neighbors’ farms,” says Jason Waltz of St. Matthews, South Carolina, an NPE grower since the program began in 2008. “We need the Bollgard 3 gene in varieties that yield and grade like DP 1646 B2XF, so evaluating for the Class of 20 this season will be exciting.”

The plots will be managed accordingly to each grower’s practices, consist of both irrigated and non-irrigated fields, planted on various soil types and be subjected to local environmental conditions.