Loyal to Cotton – Not Polyester 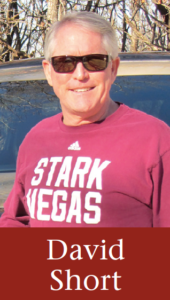 Like many, I am the product of a cotton farmer — a very successful cotton farmer. Successful, not wealthy. A dirt farmer, not a planter. Our father, the son of a sharecropper.

He told me at an early age, “Whatever you do, don’t farm.” Upon our dad’s passing during my junior year of high school, I heeded his advice. My elder brothers, successful in their own right, were already engaged in farming. The younger of the two continues to farm while the eldest is the proprietor of Short Line Manufacturing and inventor of the boll buggy Cotton-Vac.

Upon graduation from college with a degree in entomology, I chose a career in ag consulting. The veteran consultants had the acreage wrapped up, and I didn’t feel it was ethical to call on their customers.

I transitioned into a cotton gin/country grain elevator partnership with my elder brothers and a friend. Within this operation, there was an ag chemical depot operated by Valley Chemical Co., the primary supplier at the time. Within a few months and after much consideration, I decided it was time for a career change once again.

Walking through the chemical depot one day, I copied some names and addresses of manufacturers from the chemical packages and submitted 36 resumes. I wanted to be a chemical rep. After all, it appeared they really didn’t do a damn thing, right?

Within a few days, I received four responses — Monsanto, Shell, Ciba-Geigy and DuPont. After four years with Shell, DuPont acquired our assets, and I began the arduous task of deflecting the criticisms of working for a synthetic fiber manufacturer. Thanks be to God when that business unit was divested!

When my employment began with Shell in 1982, I relocated from the Delta to Jackson, Mississippi. I remember shopping for 100 percent USA cotton shirts in the local stores. None to be found! When I expressed my frustration and disbelief to my brother, he reluctantly said, “Just buy any cotton, it will reduce the supply somewhere.”

During the early years with Shell, I found myself working primarily in the Lower Delta. Making new acquaintances seemed to happen easily and very quickly with local growers being very receptive and embracing. The friendships and support of farmers such as Wendell Johnson, the Carter Brothers, Ben and Mike Lamensdorf, Crosby Simmons, Albert Dornbusch, Billy Ragland and many others will never be forgotten and I will remain forever grateful.

Every offer of promotion, I declined and have no regrets. Working directly with growers, retailers, consultants and others is where I found fulfillment. Thirty-five years passed like a Jeff Gordon lap at Bristol, without too many bumps and scrapes. There are many memories and stories that could be related, and some that shouldn’t! However, there is one many readers can relate to and appreciate.

The largest trade show of the year, The Mid-South Farm & Gin Show, takes center stage to most in the Mid-South. When industry moved forward, as some would say, we were asked to suit up in “uniforms” for our tour of duty in the trade show booth.

One day, I received two very nice shirts in the mail — my uniform. We were all going to be identifiable. One huge problem — the uniforms were 100 percent POLYESTER!!! I protested. There were no known polyester farmers I was aware of — none!

I relayed this novel information to management. To my dismay, I was informed, “You will wear the polyester shirt.” Not wanting another career change and not wanting my body to come into contact with 100 percent polyester, I found a 60/40 blend shirt with a company logo in my closet. My deepest apologies to you growers, but it was the only solution at the time.

After those brisk 35 years, there are now two empty slots in my wallet where two company credit cards use to reside.

I will always be an advocate for cotton — preferably grown and sewn in the USA!