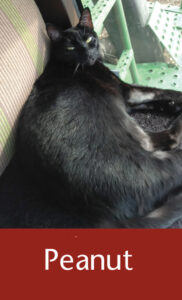 My husband, Rick, and I grow cotton, corn and soybeans in the Missouri Bootheel near the small community of LaForge. It’s not a town, so some maps will show it and some won’t. Rick grew up on a farm that is catty-corner to where we live now, and I grew up in New Madrid, Missouri.

We started our own operation in 1987 as R&C Farms. Since I grew up in town, you might say I was Rick’s apprentice at first. My job was cutting stalks with a two-row stalk cutter while driving a tractor without a cab in the cold. Rick tried to get me to do something else, but I told him I was happy doing this.

In October 2006, I found a tiny black kitten in our old shop across the road from our new shop. She had been abandoned and wasn’t weaned yet. I had to try to save her. She was so small she could fit in your shirt pocket. Therefore, we decided on Peanut for her name.
That was the year it seemed like it rained every third day. Rick and I bottle fed her every two to three hours. At night, we kept her in a tote on a heating pad beside our bed.

When it got dry enough to start picking cotton again, I told Rick I would have to take Peanut with me or she wouldn’t make it. I packed Rick’s and my lunches as well as Peanut’s bottles of milk in a thermos to keep them warm. Good thing the picker drove itself after I got turned in on the rows so I could feed her. My cab was crowded with coolers and food and water, but we made it work.

Fall drug out that year. I had Peanut in a shoe box tied to the buddy seat with a bungee cord with clean shop rags as her bedding. She gained strength and began climbing out of the shoebox and up the back of the buddy seat to a little compartment — about the size of a cigar box — to sleep.

Peanut was raised on that picker off and on for two months. By December, she was eating moist kitten food, drinking water and getting off the bottle. Her first litter box was a plastic ice cream bucket I kept in the cab with me. She was a lot of company. Rick and I figured if Peanut wasn’t so headstrong, she wouldn’t have made it.

In 2007, I wondered if Peanut would ride the picker again or freak out from the noise and movement. She was 100% house cat, not a barn cat. I took her up the steps on my shoulder. Then she jumped off and walked over to the door waiting for me to get up the ladder to let her in. The rest is history. She has picked cotton with me for 16 consecutive years even though she is only 15 years old.

Peanut stays in the house except when she rides in my truck during the fall when we go to the fields. She is very independent and headstrong. Peanut doesn’t even think she is a cat.

If we happen to carry her in the shop and she sees the other cats, she hisses at them. I think Peanut has a split personality!

In the fall of 2013, we were picking cotton one night when someone started hollering over the radio that my picker was on fire. I glanced up in my lefthand mirror, and it looked like sparklers on the Fourth of July. The fan was blowing that fire. I shut the fan off immediately and hollered at Rick on the radio that the picker WAS on fire.

I knew I had to get Peanut and myself off without letting go of her. I had no idea where the fire had started and didn’t know how much time I had. I don’t know how I got off the picker that fast, but I did. Rick happened to be in the field and was able to drive around to the other side where we were. I put Peanut in his truck and locked her in.

We’ve had two other picker fires since then that taught me to never leave Peanut in the cab by herself. Pickers can catch on fire just sitting there.

As long as she is able, Peanut is going to ride with me on the cotton picker. Even though a whole year goes by from harvest to harvest, she gets back on that picker like she just got off of it yesterday! She just sits in her seat and rides.