Picking On The Terrace Row 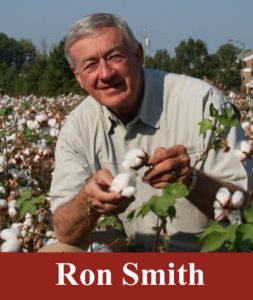 As a youngster, I grew up hand picking cotton on a small, family cotton farm in Lawrence County, Ala., during the late 1940s and 1950s. Cotton was our primary crop. It paid the bills and purchased a new pair of shoes at harvest time.

One of my favorite books, “Red Hills and Cotton – An Upcountry Memory,” by Ben Robertson, University of South Carolina Press, 1940, had a quote that sums up my, and my family’s, feelings toward cotton: “Our lives and our father’s father’s lives have been built around cotton … our Great-Aunt Narcissa stated once in public that she did not care what anybody in Washington or anywhere else in the world said about cotton, it was still the greatest crop that heaven ever gave to any country.”

On April 24, 1972, I began my career as an Extension entomologist with Auburn University. Following my retirement on Dec. 31, 2003, I continued my work as Professor Emeritus, focusing primarily on cotton insect management with Auburn as a contract entomologist. It just did not seem right to throw away all the cotton Integrated Pest Management experiences I had accumulated over more than three decades of Extension work.

When I began working with cotton insects in 1972, I had no idea what an interesting journey lay ahead of me. As far as control tools, my path has gone from DDT to GMOs. I may be the last active university entomologist who ever recommended DDT for cotton insect control. The evolution of insects during my career began with the boll weevil as the “key pest” of cotton to the current low-spray environment where stink bugs are the predominant economic insect in the coastal plains of the southeastern United States.

Earlier in my career, I had the opportunity to cross paths or develop relationships with some of the dominant cotton entomologists of the past century.

And our discipline is still in great hands now. Most cotton-producing states currently have highly productive, dynamic, forward-thinking entomologists directing cotton IPM toward the future.

I am personally most thankful for the support of Alabama cotton producers. Relationships with county or regional Extension agents, private consultants, industry fieldmen, aerial applicators and ag industry contacts have been= rewarding as well. To me, my biggest career achievement was being able to change with the times, adapt and find where new technology best fits in Alabama cotton insect control.

My career also has spanned the most evolutionary period ever in cotton insect management: From spraying for boll weevils every five days to the pyrethroid and ovicide era. From boll weevil eradication to the devastating years of resistant tobacco budworms and beet armyworms to the introduction of genetically altered varieties. And then the development of stink bug and lygus as the most economic insects.

What an evolution. I also should mention how chemical tools have changed. The old timers would never have believed we could control tobacco budworms and leave lady beetles and other beneficial insects untouched. Diamide and spinosad chemistries have allowed us to do that.

Our Delta readers may not get the significance of hand picking cotton on a terrace row so I will explain.

Back home, our hills required terraces for erosion control. They were formed by plowing up soil, which meant the topsoil was deeper on the terrace rows. This resulted in higher yielding cotton at harvest, enabling hand pickers to pick more each day and therefore earn more money. In looking back, my time as a cotton entomologist has been 45 seasons of picking on the terrace row.