The Job Of A Lifetime 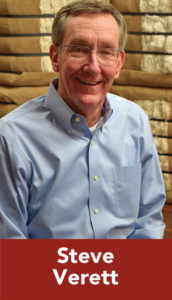 Members of the Verett family have farmed in Crosby County, Texas, since my granddad settled here in 1917. I grew up in Ralls, and my dad was a farmer but retired relatively early. At that point, my older brother, Eddie, took over the operation and hired me to help him while I was in high school.

When I worked for my dad during the summers, my job was running a hoe. I was willing to learn from Eddie, and any time I could get on a tractor I was glad to do it. He was my mentor and taught me what I know about farming in general and cotton in particular. After I got out of college, we became partners and have had a special relationship for many years. Eddie always said, “I am the nuts-and-bolts guy, and Steve is the accounting guy.”

Because of my brother’s day-to-day involvement in the operation, I was able to step off the farm as a young man and participate in organizations that ultimately led down the trail to Plains Cotton Growers. While I was representing Texas on the American Farm Bureau Cotton Advisory Committee, I met the late California cotton farmer Fred Starrh who was the Cotton Advisory Committee chairman for his state. After getting to know Fred, we developed a lifelong friendship.

Gary Ivey, a Crosby County cotton farmer, also influenced my involvement in cotton organizations. He represented Crosby County on the PCG board and ultimately served as president of the organization. In addition, he was on the Cotton Incorporated board of directors and a very progressive farmer in our area.

Gary helped me get involved with PCG where I served as a volunteer leader, an executive committee member, an officer and, ultimately, president. I also served on the National Cotton Council board of directors and served as Texas co-chairman of the NCC Producer Steering Committee (American Cotton Producers).

However, I always knew I wanted to be more than a volunteer leader. In 1993, I was approached about becoming the Executive Director of the Texas Food and Fibers Commission — a small agency that contracted for agricultural research at four different universities across the state. They allowed me to stay in Lubbock, but I spent a lot of time traveling all over Texas visiting with researchers.

About four years after I joined the commission, the leadership of Plains Cotton Growers Inc. approached me. They asked if I would be interested in taking a position within their organization since the current CEO, Donald Johnson, was about to retire. I knew this was something I wanted to do, and working for Plains Cotton Growers has been the job of a lifetime for me.

When I came on board, our gin participation rate was about 60%. Today, it’s well over 90% and has been for the past 10 years.

I believe this is the proof in the pudding that our directors and volunteer leaders have guided us in the right direction. And the PCG staff has carried out the goal of making us an effective organization dedicated to doing what needs to be done to represent our members.

During the time I have been with Plains Cotton Growers, I have also maintained my farming operation although I don’t get out to the field much. Eddie has retired, and my son, Kristofer, is now in charge and calling all the shots. He has taken the farm to a completely new level and is excited about it.

We want to keep our farming operation around because this country needs agriculture and the values of the people associated with it. I have another son who lives in Kansas and a daughter who lives in Washington, D.C. If my grandkids want to pursue production agriculture someday, we want that opportunity to be there for them.