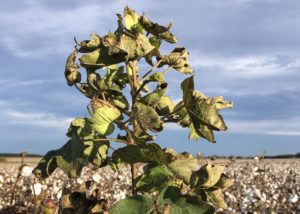 Pathologists with Mississippi State University will be monitoring a relatively new plant disease in state cotton fields once the growing season is in full swing.

Cotton leafroll dwarf virus, or CLRDV, was first reported in Alabama in 2017. It is closely related to a cotton virus known to occur in South America. Historically, that virus has caused up to 80% yield losses in Brazilian cotton fields.

Since 2017, CLRDV has reportedly infected cotton in six other Southern states. While sightings have been widespread, nothing so far indicates that CLRDV is nearly as much of a threat in the United States as it is elsewhere.

“This virus and the associated disease are closely related to a disease known as ‘cotton blue disease,’ but it is not the same,” said MSU Extension pathologist Tom Allen, who is based at the Delta Research and Extension Center in Stoneville. “We do not have cotton blue disease in the U.S. The naming situation has caused some confusion.”

1. CLRDV is difficult to diagnose in the field.

Based on observations during 2019, symptom expression appears to differ among cotton varieties, so telltale signs of the disease are not uniform. One symptom is brittle leaves. Another early symptom is an apparent nutritional deficiency.

“Plants with leaf distortions or a yellowish tint could be infected,” Allen said, “but not all plants with these symptoms tested positive for CLRDV.”

2. CLRDV was widespread throughout Mississippi in 2019.

Forty Mississippi counties have had lab-confirmed CLRDV-positive plants since 2018. An additional 11 counties were suspected to have cotton plants infected with the virus, based on visual observations of symptomatic plants.

“It’s important to note that plants expressing symptoms are not confirmation of the disease,” Allen said.

Even though cotton aphids are vectors of CLRDV, it is possible that not all aphids carry or transmit the virus to cotton. Allen does not recommend more aggressive aphid management as a prevention strategy.

“Be mindful that even though cotton aphids transmit the virus, this does not mean that all fields that have an aphid infestation are infected with CLRDV,” he said.

4. Lab tests are currently the only way to confirm CLRDV.

MSU plant pathologist Tessie Wilkerson said that because of the variation — and sometimes absence of — symptoms, only molecular detection methods can determine whether a sample is CLRDV-positive.

“With all the new herbicides and herbicide-trait technologies, it can be rather difficult to attempt to tell apart the symptoms associated with herbicide injury or the cotton virus in the field,” she said. “Some auxin herbicides can produce similar symptoms in the leaf tissue.”

5. Yield does not appear to be significantly impacted by CLRDV.

During 2019, no fields in Mississippi with confirmed positive plants were believed to have major yield reductions. One key in avoiding the potential losses associated with the disease is avoiding late planting.

“Yield losses in some CLRDV-affected cotton fields in south Alabama in 2018 were believed to be significant,” Allen noted. “The fields in question were planted in June and likely had high levels of CLRDV infection as a result of high aphid populations. However, that was not the norm and was limited to an extremely small geography.”

MSU researchers plant-mapped cotton to help determine the impact of the virus on yield. They took samples from fields where CLRDV was present, as well as from research plots where CLRDV-positive plants were harvested, Wilkerson said. The fields and plots still managed to produce good yields.