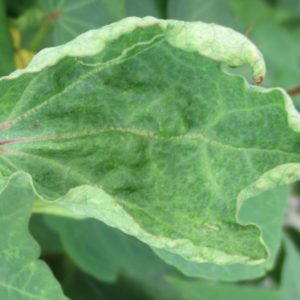 Symptoms of the disease include leaf distortion and upward curling of the leaf as shown here. The leaf may also be a blue-green color for which the disease is named — photos by Dr. Tom Isakeit, Texas A&m AgriLife

A new viral disease of cotton found in recent years in several southeastern U.S. states has now been confirmed in Texas.

The disease, cotton blue disease, was observed recently in a cotton field in Central Texas where multiple off-type plants were noted by a research group headed by Dr. David Stelly, a cotton breeder in the Department of Soil and Crop Sciences, Texas A&M University, College Station. Other contributors to the discovery were Dr. Robert Vaughn, a research specialist also with the soil and crop sciences department, and graduate students Christian Hitzelberger and Luis De Santiago.

Samples were submitted for nutritional composition and possible virus infection. Some samples submitted to Kassie Conner, Alabama Extension plant pathologist, and Dr. Jenny Koebernick, a cotton breeder at Auburn University, tested positive for the viral agent of cotton blue disease. Additional samples were submitted to other test sites to validate and expand testing.

“This is the ‘cotton blue disease’ caused by the cotton leafroll dwarf virus, or CLRDV,” Alabi said. “Its symptoms are usually seen in the new growth following infection and include stunting, blistering or crinkling of leaves, or downward cupping of the leaves.” 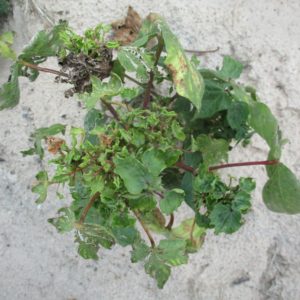 Dwarfing and plant growth distortion are also symptoms of the disease.

The virus can cause boll drop, and although yield losses have been associated with it, there are also examples where it has had no obvious effect on yield. The virus has also been detected in cotton plants not showing any obvious symptoms. Persistence of the virus in cotton regrowth is also possible.

The virus is transmitted by aphids, and additional hosts such as henbit and pigweed also have been identified, said Dr. Tom Isakeit, AgriLife Extension plant pathologist, College Station.

“The virus occurs on four other continents where cotton is grown,” Isakeit said. “Here in the U.S., it was first identified in Alabama in 2017. Then it was later discovered in the cotton-producing states of Florida, Georgia, Mississippi and South Carolina.

He said while it is still a relatively new disease in the United States, more is being learned about it during each cotton growing season.

“The appearance of this disease in Texas came relatively late in the season, so cotton productivity is not likely to be affected,” Isakeit said. “And while the prognosis for future years is not known, at this time we are alerting Texas cotton producers to be aware of its presence and be on the lookout for any symptoms that may indicate the disease is there. If they see any sign of the disease, we ask they report their findings to the appropriate AgriLife Extension county agent or specialist.”

He added that going forward, Texas A&M personnel, specifically Alabi, should be contacted for testing of cotton samples within Texas.

“Dr. Alabi, myself and our colleagues throughout the state will work with growers and others to educate them on the disease,” Isakeit said.

He said diagnosis cannot be made solely from plant symptoms and requires molecular techniques for exact identification.

“To accomplish this, Dr. Alabi uses a two-step conventional RT-PCR technique with two primers of the virus,” he said.

Isakeit said although it appears most U.S. cotton varieties are susceptible to the disease, the timing of the infection and other factors will ultimately affect yield loss.

“Current control recommendations for the Southeast U.S. include controlling weeds and regrowth cotton where the virus could be harbored,” he said. “Generally, with viral diseases, the young plants tend to sustain greater damage than the older plants, so weed control could help to delay infection.”

Isakeit said cotton stalks also need to be destroyed after harvest to prevent carryover to the following season.

“At this point, researchers across the region are evaluating the use of insecticides to control aphids for successful management of the disease,” he said.