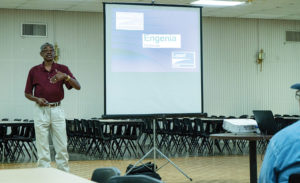 Texas AgriLife Extension’s Dr. Don Renchie, who spoke at the field day in Crawford, Texas, is the coordinator of pesticide safety education — photos by Cassidy Nemec

In the midst of summer field days for a variety of crops, it is clear that cotton is still king in Texas.

The Westside Row Crop Tour took place June 21 in Crawford, Texas, and started with showcasing some grain variety plots before moving on to classroom sessions.

Major topics included the annual variability in commodity pricing. Johnson relayed that 2018 weather brought more drought while 2019 weather brought excess moisture. This, in turn, raises prices that do not drop until after the season of drought or rain.

World events, Johnson says, also cause spikes or declines in energy prices. He says that much of profitability is influenced by events out of producers’ control.

He referenced a few more reasons for pricing variabilities. Johnson recommended that those in the ag industry look at market trend seasonalities to better strategize. He emphasized that the best those in agriculture can do is “focus on things that matter and that you can control.”

Shane Halfman, research and germplasm specialist at Americot, gave a lesson in “Cotton 101.”

Following his discussion on the basic concepts, development stages and pests in cotton, Halfman advised growers to choose the right variety and seed for the job and farm.

He impressed upon the audience the important of common sense when dealing with chemicals used in the fields. After discussing protection standards, he reiterated that “common sense makes sense when you use sense.” 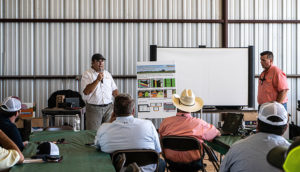 On June 25, BASF held a field day in Snook, Texas, on some of Texas A&M’s farms.

“You want to hit it [weeds with herbicide] when it’s small,” Nolte says.

Dr. David Kerns, Texas A&M AgriLife Extension statewide integrated pest management coordinator, talked about insect management in cotton and sorghum, noting the huge egg lay for worms going on at the time. He warned about using pyrethroids since resistance to that insecticide class was detected across much of Texas in 2018.

In speaking of Prevathon and Besiege applications, Kerns says, “Timing is actually more critical than rate.”

The moral of the BASF field day, it seems, is that timing is truly everything.

Later that afternoon, a Bayer field day was held at their Brazos Bottom headquarters near Snook, Texas.

Fran Deville, climate business manager for The Climate Corp., and Scott Taylor, Bayer field sales representative, discussed Climate Field View. Deville says that by using the Field View system, growers can plant their own test plots and create their own variety trials. He adds that this system generates data used to assist growers in making decisions.

Both men spoke about the planting, application and harvest summaries produced by the system. “The digital ag platform that makes the invisible visible,” they said.

Michael “Hap” Hazzard, salesman for Bayer, urged growers to move away from a single mode of action in their herbicide treatments. He recommended to always use pre followed by post herbicide programs and said that it is necessary to “fight weeds across all cropping systems.”

“We need to use plant growth regulator products to try and take it [the cotton crop] from vegetative to reproductive growth,” he says.

Schwarzlose says it is necessary to know the variety and the environment of the crop because different varieties respond differently to plant growth regulators. He also suggested getting the PGR in the plant early, 10 to 14 days later after the first PGR shot, and then gauge what needs to be done from there. 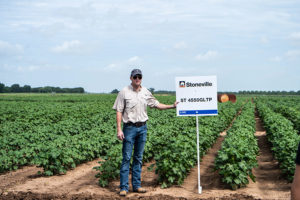 During the BASF field day in Snook, Texas, product manager Heath Reeves talked about the new Stoneville and FiberMax cotton varieties that are now commercially available.

Cotton harvest aids, as Schwarzlose says, need to be prioritized based on correct timing and maturity. He notes that good timing is anywhere from 50-70% open boll and that growers must still consider what varieties are planted and what is happening in the crop and the environment before deciding on and applying a defoliant.

The Moral To The Story

Based on information presented throughout these three Texas field days, it seems that timing is crucial in this hectic season, and a myriad of environmental factors must always be given consideration when choosing products for a cotton crop.
“King Cotton” can only remain king if well taken care of.

Cassidy Nemec, a senior at Baylor University, is currently pursuing a degree in business and journalism.