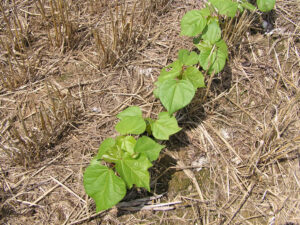 However, cover crops represent a “green bridge” throughout the fall and early spring that may facilitate the movement of insect pests and plant pathogens into above- and below-ground plant structures. Furthermore, cover crops may increase soil moisture and lower soil temperature compared with tilled fields at planting, resulting in more favorable conditions for seedling disease development.

Seedling corn, cotton and soybeans are often adversely affected by many factors, including excess moisture, cold temperatures and a complex of above- and below-ground insects and plant pathogens. The underground insects include seed corn maggots, wireworms and white grubs, while the above-ground insects include thrips, chinch bugs and three-cornered alfalfa hoppers, among others.

Seed corn maggots thrive in lush organic matter and survive well in fields with high organic matter, while wireworms, the larval stage of click beetles, favor laying eggs on grass crops such as wheat. Most of these insects require a food source to successfully overwinter and subsequently begin reproduction when temperatures begin to warm in spring.

Seed rots and seedling diseases (also known as “damping off”) are mainly caused by Fusarium spp., Pythium spp. and Rhizoctonia solani during less-than-optimal planting conditions. These fungi and many other pathogens naturally persist in the soil, and it is not unusual to see problems with stand establishment in the same areas from year to year.

Management practices that can minimize the effects of pest insects on field crops include “burning down” cover crops with herbicides in a timely fashion (six weeks before planting). This will provide enough time for the available biomass above the soil to dry out and force any harbored insects away, although this timing may not allow enough time for below-ground insects to cycle out or succumb to a lack of forage.

Earlier burn-down timings and the use of tillage operations may allow enough time for insects to cycle out or be physically removed or destroyed with implements. The best way to avoid seedling diseases is to plant the right population during the recommended timeframe at the appropriate depth under optimal soil temperature and moisture conditions.

Seed treatments can also mitigate the negative effects of insect pests and plant pathogens. Insecticide seed treatments are typically organophosphate (acephate) or neonicotinoid-based insecticides that coat the outer layer of the seed, offering protection from below- and above-ground early season insect pests. 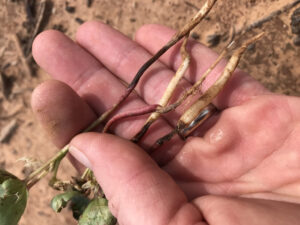 Seedling disease or “damping off” caused by Rhizoctonia solani in cotton.

For example, thrips are considered the most significant early season pest in seedling cotton and can be found on almost all cotton acreage every year. In this situation, it might be economically advantageous to use insecticide seed treatments to suppress thrips. Fungicide seed treatments absolutely will provide economic return in cotton in most situations; however, in corn and soybeans, they are only recommended in fields with a history of problems or when adverse conditions persist.

Over the past three years at the Macon Ridge Research Station, researchers have investigated the efficacy of seed treatments when corn, cotton and soybeans are planted in fields that have been fallow or planted with legume (Austrian winter pea) or grass (wheat) cover crops.

In most instances, there was either no difference in stand establishment or plant populations trended lower with cover crops. Yields of corn, cotton and soybeans have been consistently higher with wheat and winter pea covers. Thus far, seed treatments have not had a significant effect on stand establishment in corn and soybeans; however, stands and yields are consistently better in cotton with fungicide and insecticide seed treatments either alone or in combination when planted following wheat or winter pea cover crops.

Sebe Brown is an assistant professor at the Dean Lee Research and Extension Center, Alexandria, Louisiana. Trey Price is an associate professor and Tyler Towles is an entomologist at the Macon Ridge Research Station, Winnsboro, Louisiana. Renada Davis is an extension associate in the Northeast Region. Myra Purvis, Karla Emfinger, Dustin Ezell and Wade Walker are research associates at the Macon Ridge Station.

This article originally appeared in the fall 2020 issue of Louisiana Agriculture.