Look to soil temp, not calendar, for optimal planting time 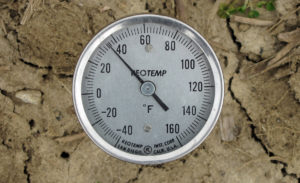 Cotton farmers should look to soil temperature rather than the calendar for optimal planting time, according to Louisiana State University AgCenter experts.

Cotton is usually planted between mid-April and mid-May in Louisiana; however, recent cooler temperatures may have slowed seasonal spring soil warming and could significantly affect the critical germination period required for the tropical plant.

That is why it is important to monitor soil temperature and the five-day weather forecast before planting.

“If planted too early, survival of cotton seedlings will be reduced, and the remaining plants are less vigorous, which can cause reduced yield potential,” said AgCenter cotton specialist Dan Fromme.

A cumulative effect from cool temperatures during the germination period can result in stand loss and yield reduction.

“If emerging seedlings are injured, they will lose the capacity to manufacture vital carbohydrates and proteins needed to remain vigorous and healthy during the early vegetative stage of development,” Fromme said.

Malformed seedlings, loss of the taproot, reduced vigor, undesirable stand and increased likelihood of seedling disease problems are some of the potential results from chilling injury.

“The longer the seeds are exposed to the cold, the severity of injury increases, causing delayed maturity and reduced yields,” he said.

“Delayed planting of up to four weeks until optimal conditions exist may only result in a one- to two-week difference in flowering,” Fromme said.

✓ Sunlight provides radiant heat that is absorbed by the soil surface.

✓ Soil surface moisture will produce a cooling effect due to evaporation and requires more heat from sunlight or warm air for warming.

✓ Higher levels of crop residue on soil surfaces can result in slower soil warming due to increased soil moisture.

Farmers should look for a mean daily temperature of 65 degrees Fahrenheit or greater at a 4-inch seeding depth measured each day at 8 a.m. for at least three consecutive days.

Research has shown that yield potential may be reduced when the accumulated number of 60-degree days is less than 10 during the five days following planting.

“For each day beyond the first 10 days post-planting that emergence is delayed, yield potential declines by about 0.7%,” Fromme said.

More information on how to determine the five-day outlook for 60-degree days can be found in LSU AgCenter Publication No. 3661, “When to Plant Cotton,” online at https://bit.ly/plantingcotton.

Hourly soil temperatures at the 4-inch planting depth in Louisiana can be found online at weather.lsuagcenter.com.

The LSU AgCenter contributed this article.