Expect another challenging year in the Delta from bollworms 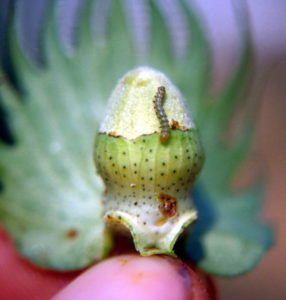 The 2019 season was one of the most challenging years we have had from a bollworm standpoint in both cotton and soybeans. The issue was not from a numbers standpoint where the numbers overwhelmed the traits and foliar insecticides. It was more an issue of population dynamics and how the egg lays occurred.

Rather than a normal population growth curve where the number of eggs start off low and increase over a seven-day period ending with a heavy egg lay, we had a low trickling of eggs that persisted over several weeks. This made decisions to spray very difficult.

In a more typical year, growers can make a spray when the numbers of eggs increase and peak, which usually occurs around the middle of July. The egg lay drops to almost zero for a period of time and then peaks again in about a month, triggering a second spray.

In 2019, we never really saw the first peak in eggs that makes the decision to spray easy. In cotton, we typically got reports of low levels of eggs that ended up turning into low levels of larvae and damage that got worse over time, especially north of Highway 82.

As a result, we had a lot of sprays go out a little later than optimum in two-gene cottons. In most cases, even if the sprays went out late, the levels of survival and damage we saw were mostly not economical. In other words, the sprays worked, just not as good as they could have or as good as we would have liked.

In soybeans, several factors contributed to an atypical year from a bollworm standpoint. The continuous low level egg lay like we saw in cotton was an important factor, but the later planting of soybeans also contributed. Typically, one insecticide application is all that is needed in soybeans for bollworm, but the bulk of the soybeans being planted later made them attractive to bollworm for a longer period of time.

That combined with the extended egg lay resulted in most fields that we looked at having very small larvae, large larvae and all sizes in between in the field at the same time. This is something that we rarely see in Mississippi.

The population dynamics of bollworm in cotton and soybeans are mostly influenced by corn. We believe that the extended planting window and later planting dates of corn was a primary cause for what we experienced in 2019. Trying to predict what insect populations will be like during July and August is almost impossible in April.

And this year is setting up a lot like last year from a bollworm standpoint. Getting corn planted in a timely manner has been difficult with all of the rain this spring, and that will likely influence bollworms in cotton and soybeans.

As of right now, we expect another challenging year from a bollworm perspective. We will be collecting bollworms from crimson clover in a couple weeks, but that will not tell us a lot about the upcoming crop season. Because corn is such a good host during the month of June, even low populations during the spring can turn into big populations during July.

Similarly, big populations in clover don’t really matter if green corn silks are not available when bollworm that developed on clover emerge as adults. The point is that corn is the key.

For 2020, the best advice we can give is to be prepared for anything and follow our thresholds. In two-gene cotton (Bollgard II, TwinLink, WideStrike), we are still suggesting an egg threshold of 20% of plants with at least one egg. In three-gene cottons (Bollgard 3, WideStrike 3 and TwinLink Plus), we are sticking with a damage threshold.

For soybeans, we have some good tables in the insect control guide (http://extension.msstate.edu/sites/default/files/publications/publications/P2471_web.pdf) that Don Cook put together based on research from Dr. Brian Adams’ doctorate research.

We will monitor what is happening in corn and at more southern locations to give updates throughout the summer.