Management Considerations For The Rest Of 2019

• By Guy Collins and Keith Edmisten •

Statewide, the 2019 crop continues to be the most variable crop that we’ve seen in quite some time, primarily due to planting date, timing and duration of drought/heat stress, and spotty rains. In some areas, the crop varies widely within a small area, while other areas are somewhat more uniform.

This variability can complicate management decisions as we move into the latter half of August and into the Fall. This article will hopefully address several of the possible scenarios that may transpire in the coming weeks.

✔ Last Effective Bloom Dates: The last effective bloom date (latest date in which a white bloom has a reasonable chance of developing into a harvestable boll) varies across the state in many years, and is strongly dependent on fall weather in essentially every year. We can only go by prior experience and historical observations. 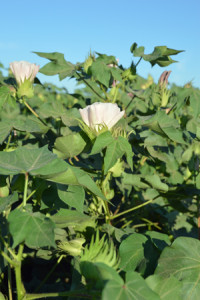 If cloudy, cooler weather prevails beginning in early September, and/or if an early frost occurs, the last effective bloom date could be as early as Aug. 15. If sunny, warm weather with periodic short-lived rains occur, and/or we have a later than normal first frost, the last effective bloom date can be as late as September 1st, and occasionally beyond.

For our northern counties, the last effective bloom dates generally falls somewhere around Aug. 20–25, whereas this date generally falls somewhere around Aug. 25–Sept. 1 in our more southern counties. Predicting the actual date is essentially impossible until we know what kind of weather will occur during September and October and when the first frost will occur.

With that said, knowing last effective bloom date is most important for cotton planted in very late May or early June (where we are trying to set and develop as many harvestable bolls as possible), and for cotton that has developed a large top crop comprised of noticeably less-mature bolls compared to the bottom crop.

Cotton that has a fairly normal to heavy boll load, with normal progression of boll development (continuous blooming and boll development from the bottom nodes and upwards/outwards on the main stalk, with no major fruiting gap), and/or early planted cotton will likely shed most of the blooms or small bolls that occur from this point forward.

For late planted cotton, every harvestable boll counts since the bloom period is compressed, so if it is still actively setting new nodes and upper bolls, we need to know which ones have a reasonable chance of being harvested.

For cotton that experienced severe or prolonged drought/heat stress during mid-bloom or earlier and was forced into a premature cutout, late July rains and recent rains may have renewed terminal growth and a noticeably less-mature top crop may be developing prior to the last effective bloom date. If this is the case, growers are encouraged to closely evaluate the bottom and top crop, to determine how much each could contribute to yield.

If a large portion of total bolls are represented by the bottom crop, growers may not want to wait too long on just a few smaller upper bolls to develop. If yield potential of the bottom crop is poor AND the less mature top crop (that blooms prior to the last effective bloom date) could contribute significantly to yield, growers may want to chase the top crop by delaying defoliation and allowing more time for boll development.

Growers are strongly encouraged to closely evaluate both late planted cotton and cotton with a strong, but immature, top crop at or around their last effective bloom date.

Waiting until mid/late September or later to evaluate the crop will likely results in poor evaluation of boll harvestability, therefore we encourage growers to flag several plants per field on the node where the uppermost white bloom appears by the last effective bloom date.

Later in the fall, this will enable growers to more accurately assess which bolls they have a reasonable chance of harvesting and which ones they should not chase.

In situations where there is a distinct difference in maturity between the top and bottom crop, growers should first decide which crop they want to chase the most. If the top crop represents a significant amount of harvestable bolls and the grower decides to wait on them to develop, defoliation timing decisions could be more complicated.

The presence of a fruiting gap makes percent open and nodes above cracked boll less precise in determining defoliation timing. Cutting or slicing bolls weekly to monitor development is really the best method in these cases to determine if bolls are mature enough for defoliation to occur.

When mature, bolls will be firm and difficult to slice open, while the seed coat will be darker colored with well-formed cotyledons inside, and drying lint that strings out when bolls are cut open. Keep in mind that these bolls will develop under cooler temperatures, therefore requiring much more time to fully develop. Be prepared to utilize a high rate of ethephon, ethephon+cyclanilide, or ethephon+urea sulfate to hopefully open these bolls if defoliation occurs under cool temperatures.

✔ Cotton that is currently “crashing”: There have been numerous calls recently regarding earlier planted cotton that is beginning to turn to more of a reddish or yellowish color with several small leaf spots on most of the plant. This is perfectly normal ripening of the cotton plant for this time of year, which will become more pronounced in the coming weeks.

We don’t want to see this occurring during mid bloom or earlier, but this won’t likely be a problem for early planted cotton that is now reaching 6 weeks of bloom or later. These color changes have occurred slightly earlier than normal this year, which is indicative of severe prior drought stress coinciding with a developing boll load, and possibly shallow roots in some cases. When this happens, leaves are becoming depleted of nutrients since the demands of the boll load exceed what can effectively be taken up by roots, which is magnified by prior drought stress.

This should condition cotton for better defoliation, since the senescence process will be accelerated, however, growers should be prepared to address regrowth if cotton begins to self-defoliate a few leaves in early September if conditions are warm and if soil moisture is adequate. TDZ (Dropp, Freefall, other tradenames) in tankmixes can effectively address regrowth. TDZ+diuron (Ginstar, Adios, Cutout, others) are preferred when cooler weather begins with regrowth remaining on the plant.

✔ Watch the weather and defoliate/harvest when the crop is ready: There will likely be several situations where the crop is ready to be defoliated in early to mid September. This is generally earlier than when most growers are ready to begin defoliating. These cases will most likely concern early planted cotton or drought-stressed cotton where the bottom crop is the only crop.

Cotton with a normal fruiting pattern and a strong boll load, or cotton where the top crop represents most of the harvestable bolls, will likely be ready to defoliate noticeably later (late September or early October depending on weather). The point here is that growers should watch the weather closely beginning in early September.

If cotton is ready to be defoliated in early to mid September AND there is no major storm approaching in the foreseeable future, growers should go ahead and defoliate these fields. Using a high rate of an ethephon-containing product can accelerate boll opening and allow for an earlier harvest. Harvest this cotton as soon as it is ready and get that cotton to the gin.

There’s no way to know now when storms may occur, nor their path or severity, but the point here is to avoid waiting when the crop is ready and the weather forecast is favorable. Defoliating and harvesting earlier (assuming the crop is ready for such) may help mitigate losses resulting from severe fall weather. In order to pull this off, we need to be getting pickers ready now, and closely monitoring our crop in the next couple of weeks.

✔ WATCH FOR HURRICANES AND MANAGE ACCORDINGLY: I really hope this is wasted verbiage and that hurricanes aren’t an issue this year. However, recent experience has taught us a lot, and we should be cautious with our decisions if hurricanes are imminent during our defoliation/harvest season.

For cotton that has been defoliated for several days (10-14 days usually, sometimes less) and a hurricane is approaching….if most of the leaves have been removed and most bolls are open, park the sprayer and get pickers into those fields. Move that cotton, or build modules on, high ground. If some leaves get into harvested lint and/or if not all bolls are open, then yes,… we could have some trashy cotton with less than perfect yields, but at least we have some cotton to gin.

This isn’t an ideal situation, however some gins have indicated that they can be effective at removing some older leaf material that is still green or regrowth from lint, whereas desiccated material is more difficult to remove (this is what we’ve been told, so growers should consult/verify these scenarios directly with their gin). This is another article that we’ll be able to know who reads beyond this point……

For cotton that has NOT yet been defoliated, has a significant number of closed harvestable bolls on upper nodes, and a hurricane is approaching….We can’t say this loudly enough: “DO NOT DEFOLIATE until after the storm passes.” Cotton remains protected when bolls remained closed, and can open more readily after a storm passes and usually under better conditions.

In many cases over recent years, growers that delayed defoliation until after a hurricane passed, benefitted significantly from it. The caveats to this are getting slightly behind schedule, or if plants lodge and closed bolls are in direct contact with thick foliage, mud, or standing water/flooded fields.

But nothing we do helps in these extreme cases. If fields drain fairly quickly and sunny drier weather resumes after a storm, bolls that remained closed during the storm will most likely be harvestable, and in many cases, can represent the majority of the remaining cotton to be harvested. Defoliating during the several days prior to a hurricane, when several closed bolls are present, can slightly pop open (or even fully open) these closed bolls. When bolls are barely popped open, water will enter the boll and result in hard-locking (not harvestable at this point), or the rain/wind will cause the more open bolls to be lost.

If cotton is nearly all open prior to a storm, try to harvest it if you can with the understanding that there may be a penalty for leaf/trash or less-than-perfect yields (talk to your gin prior to making this decision). If a high number of closed bolls are present when a storm approaches, leave it alone.

In extreme cases (flooding, continued wet weather post-hurricane, etc.), nothing we do will help. Delaying defoliation for cotton with a high number of closed can substantially improve harvestable yields (or reduce storm losses) if fields drain fairly quickly and good weather resumes. There’s really no advantage to defoliating during the days leading up to a storm that we can think of, when there are good closed bolls present at the time.