It is another tool in the toolbox for cotton farmers. It will definitely help us out and is something that we need.” – Tucker Miller

One fact is clear about today’s cotton production. Numerous strategies exist to deal with glyphosate-resistant weed outbreaks, and that is a plus for farmers in all parts of the Belt. Producers already had made remarkable progress against weed resistance in recent years by rotating chemistries and implementing residual herbicide applications with multiple modes of action.

BASF’s Engenia herbicide now offers an additional action for post-emergent broadleaf control in dicamba-tolerant crops. Product registration is anticipated in time for the 2016 season. The new herbicide has an advanced dicamba formulation that provides an additional site of action for control of broadleaf weeds in dicamba-tolerant crops, including soybeans and cotton.

“It is another tool in the toolbox for cotton farmers,” says veteran Mississippi cotton consultant Tucker Miller. “It will definitely help us out and is something that we need.” 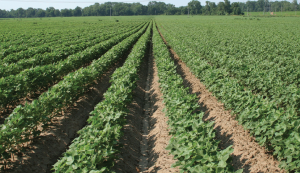 Having clean fields is the ultimate goal for producers as they continue to deal with weed resistance.

Many Key Factors
Miller says two important keys will be the germplasm of varieties planted and how the herbicide system works with that cotton. And, he notes, an effective residual herbicide application program remains vital.

“We need to have farmers continuing to use residual herbicide applications and rotating chemistries,” he says. “We still have to spray for weeds when they are small.”

Chad Brommer, technical market manager for herbicides at BASF, agrees that Engenia is not a silver bullet for controlling glyphosate-resistant weeds. But, he does believe it is an effective tool for controlling resistant broadleaf weeds and will work more efficiently with a layered residual application program.

“In the past, farmers just kept hammering away at glyphosate-resistant weeds,” he says. “They could hold them back, but then they would get away from them again.

“Engenia is part of a weed control system with multiple sites of action. It is not meant to exist on its own. You still need to have a layered residual system in place.”

Brommer says the approach that delivers the best results is when a farmer starts with a clean field. The residual application should then follow, and that will help in keeping weeds from germinating.

BASF plans to offer training programs to support applicators. The On Target Application Academy was established to provide field-based applicator training with a focus on proper nozzle selection, calibration, boom placement, environmental considerations and use of effective drift reduction additives.

Most industry observers like the idea that many companies are offering new technology in the ongoing battle against weed resistance. “It’s good to have choices,” says Jason Bond, weed scientist at Mississippi State University’s Delta Research and Extension Center.

“With the grower as the end user of the product, the competition is doubly good. But, I also know this technology is an investment in the future.”

BASF contributed to this article.