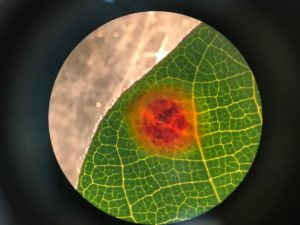 The Texas A&M AgriLife Extension Service has found southwestern cotton rust disease in fields in western and southern Gaines County and along the county line between Cochran and Hockley counties.

AgriLife Extension specialists say the severity of the disease is still low, and fungicide application is not yet necessary – but producers should be aware of the symptoms.

With the disease, yellow lesions first appear on the upper side of the leaf that later turns into a red-to-orange lesion with a yellow halo. On the lower side of the leaf, yellow aeciospores are observed. When touched, fungal spores stick to the finger.

The disease can traditionally be found in the Trans-Pecos area, where many grama grasses are found. Primary inoculum is believed to be blown from the Pecos area, Monclova-Santana said.

The fungus produces three kinds of spores on Bouteloua, Chloris and Casthestecum grasses, including basidiospores, which can then infect cotton. Aeciospores are produced on cotton and can infect grama grasses, but there is no plant-to-plant transfer. The disease requires rainfall of about 1 inch or more, followed by 12 to 18 hours of high relative humidity to fully develop.

“Any fungicide spray has to be done prior to the disease first showing up,” she said. “The fungicide needs to be applied before a rain event in order to prevent infection. Once the disease is established, it’s there. When the disease shows early in the season it can cause defoliation, and losses up to 75% have been reported in the U.S. However, this is not the case right now.” 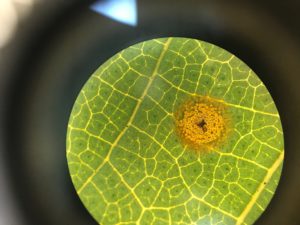 Yellow aecia cups on the lower side of a leaf.

“Applications are only recommended as a preventive method when environmental conditions are favorable and disease symptoms are not yet present. Removal of grama grasses is advised.”

Monclova-Santana said cotton is far enough along already this season that the disease won’t really cause any damage.

“Now we know that some grama grasses might be near the Gaines and Cochran counties; for next season if a rain event is coming, it might be a good idea to spread fungicide if it is early in the season,” she said.