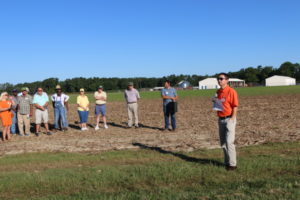 Cover crops during the off-season can help build organic carbon in the soil, Ye told almost 200 people who attended the 2019 Pee Dee Research and Education Center Field Day. Eight treatments of three cover crops – cereal rye, crimson clover and winter peas – were tested in fields at the PeeDee REC. Cereal rye was the best of the tested treatments.

“These treatments included the cover crops planted by themselves as well as in mixtures,” Ye said. “Cereal rye seemingly had the highest potential to increase soil organic carbon.”

Carbon is a main component of and contributor to healthy soil. It is critical to soil function and productivity. Higher soil organic carbon improves aeration, or oxygen in the soil, as well as water draining and retention, reducing erosion and loss of nutrients.

“Much of the soil here in the Pee Dee region is sandy,” he said. “Soil fertility is low, and the ability for the soil to hold water is minimal. Cover crops can help change this by adding both root and above-ground biomass. This will help improve soil structure, which will help the soil be better able to hold water and nutrients.” 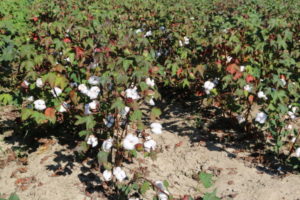 Participants of the 2019 Clemson Pee Dee Field Day learned how the corn earworm also is a cotton pest. In cotton, it’s known as the bollworm.

“The corn earworm is the most common pest of corn, though generally not an economic pest,” said Francis Reay-Jones, entomologist and Integrated Pest Management coordinator at the Pee Dee REC. “The most common type of injury is caused by larval feeding in the corn ears.”

Corn earworm injury typically is restricted to feeding on the tips of ears where kernels often have not fully developed, with generally limited damage to harvestable kernels. Planting Bt corn can be an effective but imperfect management tool to use against the corn earworm. With most Bt traits, some resistance has developed, she said.

Reay-Jones said the most noted benefits from planting Bt corn hybrids include controlling corn borers and fall armyworm, both of which can sometimes be significant pests in the United States. Planting corn early, from mid-March to mid-April, can help growers avoid high corn earworm and fall armyworm pressure later in the season.

Although corn earworm is a minor pest of field corn, it can be a major pest of sweet corn, and planting Bt sweet corn hybrids can help to reduce damage to ears.

Corn earworm also is a major pest of cotton. In cotton, the pest is known as the bollworm. Because almost all of South Carolina cotton is planted with Bt varieties, bollworm resistance to Bt toxins is an important issue for cotton growers.

Jeremy Greene, entomologist stationed at Clemson’s Edisto REC in Blackville, said early detection is important for managing these and other insects.

The stink bug is the number one pest of cotton. These insects seem to cause a lot of problems during August, which Greene refers to as “Stink Bug Month.”

“We had very little trouble related to stink bugs in cotton,” he said. “The hot, dry weather very likely hurt the overall populations of insects we see in cotton – it certainly cut back on stink bug activity. Any replant or other late-planted cotton may need a little more attention regarding stink bugs, but most of our acres for 2019 are likely safe from additional losses due to stink bugs.”

In addition to the stink bug scouting aid, Greene also helped create other insect pests-fighting tools including the Thrips Infestation Predictor for cotton and the mobile apps – Sprayer Calibration App and the Mix My Sprayer App.

Both apps, available for iOS and Android, can be found at https://www.clemson.edu/extension/mobile-apps/.