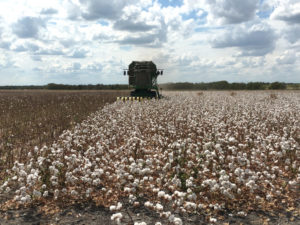 Texas cotton farmers whose fields survived inhospitable weather conditions early in the season are hoping for a market rally, but a Texas A&M AgriLife Extension Service expert said price speculation at this point is risky.

Dr. John Robinson, AgriLife Extension economist, College Station, said cotton acreage is down due to weather delays or unfavorable conditions for the crop’s emergence in many parts of the state. But it’s still unclear, from a market perspective, how a reduction of cotton acres will affect prices long-term.

“I’m hearing a lot of different voices saying the report isn’t accurate and that they believe the actual acreage number is much lower,” he said. “And I agree that the report is not as reliable as it usually is, but there is a lot of uncertainty that muddles up the big picture. In the end, I think that tempers any speculation on where the market will be when we get certified acres data from USDA.” 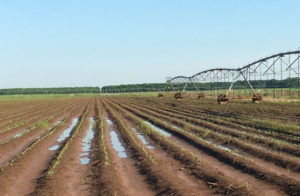 Late-planted cotton struggled to survive excessively wet conditions this spring. Some growers have planted four times before successful emergence. Some have fields that weren’t planted at all due to weather — Texas A&M AgriLife Extension Service photo by Dr. Gaylon Morgan

Even if the crop is down several hundred thousand acres more, Robinson said expectation of a short crop and higher prices could be premature due to good moisture profiles and newer cotton variety characteristics.

“Sure, acres might be down, but it’s still difficult to speculate,” he said. “What if the acres that are planted produce record yields because of good moisture this summer and ideal maturation conditions in September and October? Given that possibility, I’d be hesitant to bet on extreme price volatility at this point.”

Producers who have cotton in the ground are hopeful for better prices than they are getting now, which are below profitability based on AgriLife Extension crop calculations.

Cotton futures have settled to the mid-60-cent-per-pound range since May compared to around 80 cents per pound last fall, he said. Most farmers need cash prices to be in the 70s to cover their input costs.

Robinson said another major factor in the cotton market – resolution to the trade dispute with China – could happen unexpectedly. An agreement would likely mean a price rally despite reductions in U.S. cotton exports to China over recent years.

“China used to be the top destination for U.S. cotton, but we’ve lost market share to Brazil, and that’s thrown a wet blanket on export sales,” he said. “It’s encouraged other international buyers to negotiate better terms with U.S. merchants, which translates to lower cash offers for U.S. producers.”

Robinson said he expects cotton to remain around the mid- to upper 60 cents per pound for the foreseeable future, unless an agreement with China is reached. That leaves cotton farmers with a healthy crop guessing about potential prices at harvest or contracting at currently lower prices to cut their losses.

“It’s a tough spot to be in,” he said. “They want an opportunity for a higher price, and bullish factors could deliver. But they also might wait for prices to go to 78 (cents per pound), and they may never get there.”