By Stacey Gorman,
Cotton Board
Director of Communications — 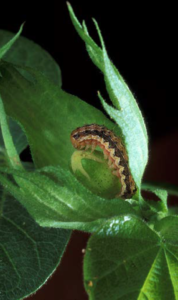 Bollworms can be a serious cotton pest,
especially in southern cotton-growing
areas.

Cotton is susceptible to a wide range of pests, so it’s only natural that insect management is one of the highest variable costs associated with producing the crop.

This year, as growers prepare for the upcoming cotton growing season, entomologists across the Cotton Belt are calling attention to an emerging pest issue — bollworm resistance in dual-gene Bt cotton.

“Bollworm resistance in Bt cotton was pretty wide spread last year,” he says. “Therefore, we can reasonably expect this pest to be an issue again in 2018.”

Although it is too early to tell what the extent of bollworm resistance will be in dual-gene Bt cotton this year, there are signs to watch for in other crops. Bollworms feed on a variety of hosts, and thus could potentially be exposed to Bt throughout the year.

“If we see a large number of bollworms successfully come through Bt corn this year, we can assume these moths are tolerant to Bt toxins. This will likely mean we will see a greater survival rate of bollworms in the most commonly planted dual-gene cotton varieties,” Kurtz says.

Bollworms have always been a known pest of cotton but have not been the major pest of concern for some time. Dr. Dominic Reisig, associate professor, North Carolina State University, says, “The caterpillar pest of most concern to cotton has typically been the tobacco budworm.”

Bt cotton was commercialized in 1996 and was extremely effective in managing tobacco budworm.

However, bollworms have always been more tolerant of Bt toxins than tobacco budworms, so Cotton Incorporated has been watching bollworm resistance closely for many years.

Cotton Incorporated has invested in a myriad of projects to address this resistance issue and ultimately boost growers’ bottom line. Some of the projects focus on techniques to improve resistance monitoring.

“Once we identify resistant populations, we try to dig deeper and understand the characteristics specific to that population so we can better control it,” Kurtz says.

Because of the increased resistance, cotton growers saw significantly more damage from bollworms in their 2017 crop.

In response, a group of Mid-South and Southeast entomologists have been working to refine thresholds, so they can better inform growers when to spray their dual-gene Bt cotton. Current thresholds are available in each state’s annual insect control guide.

Another Cotton Incorporated project done in conjunction with Mississippi State University is looking at computer modeling to simulate scenarios for resistance development to the newer three-gene Bt cotton and corn.

“The new three-gene Bt cotton varieties add the Vip3A gene, which increases bollworm control and improves resistance management,” Kurtz says. “We need the seed companies to completely switch to three-gene varieties as quickly as possible to slow the spread of resistance.”

Since bollworm resistance is expected again this year, cotton growers should enter the season with a plan and be prepared to scout and spray dual-gene Bt cotton if they reach threshold to prevent yield loss.