Bacterial Blight Reappears In The Delta, Damaging Fields And Prompting Repeated Calls For Use Of Resistant Varieties.

Since bacterial blight reappeared in the Mississippi Delta in 2011 after a decades-long hiatus, researchers and consultants continue to debate the cause. But one thing they agree upon is one of the best ways to manage this bacterial disease is through use of resistant varieties, since no antibiotics are registered for use on cotton.

That may be easier said than done because some varieties bred for the Delta that also have desirable herbicide, worm and disease traits are in limited supply.

Although researchers and consultants also are promoting deep tillage as a way to reduce the potential source of overwintering inoculum that carries over from season to season on plant residue, at least a few say the practice is impractical because growers have adopted reduced tillage or no-till. Rotation out of cotton for a year also can help reduce the likelihood bacterial blight in subsequent seasons. But cotton prices, rather than disease pressures, often dictate producers’ actions.

Why The Disease Resurgence?

Tom Allen, Mississippi State University Extension and Research plant pathologist based at the Delta Research and Education Center in Stoneville, has been promoting bacterial blight awareness for the past several seasons. He most recently spoke on the subject at the 2018 Beltwide Cotton Conferences in San Antonio, Texas.

For those who haven’t heeded his past advice to plant resistant varieties, Allen says he frequently ends up observing bacterial blight in field situations throughout Mississippi during the cotton season. Why the disease reappeared in the Delta in 2011, causing economic damage in many fields, has been the subject of debate. Calling it an “uncomfortable subject,” Allen says he has his own theories.

“I think it’s clearly seedborne over a large percentage of the acres, especially in places where people had not planted cotton for a number of years,” he says. “Most of the calls I’ve looked at since 2011 have been field situations where cotton was not grown for several years. In these specific situations, where cotton has not been common in the rotation, the big question is where the bacterial blight came from. The bacterium does not move great distances on its own. The bacterium cannot survive in soil for a long time. Even though the organism can survive on residue between seasons, seed remains one of the more important sources of inoculum.”

Mike Robinson, eastern U.S. breeding manager for Bayer CropScience in Leland, Mississippi, says he suspects the organism may have been in the Delta since the previous outbreaks of the 1970s. But pathogen levels were so low they didn’t cause attention-grabbing damage. Changes in production practices, including varieties with different genetics, as well as the weather may have created the so-called “perfect storm” for the pathogen.

“I don’t think it’s here to stay, Robinson says. “I think it’s always been here. I think it’s a combination of factors that allowed it to explode in the manner it has.” 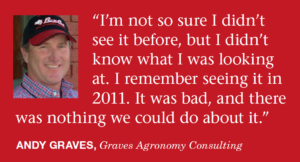 Andy Graves, owner of Graves Agronomy Consulting in Clarksdale, Mississippi, described the fields he walked in 2011 as “ground zero” for the bacterial blight outbreak.

But Graves says he doesn’t agree with the seedborne theory. He had two seed growers plant the same variety from the same lot in side-by-side fields. One developed bacterial blight; the other didn’t. If it were seedborne, he says he would have expected both fields to become infected.

Although many seed companies for some time have had blight-resistant varieties suited to West Texas, where the disease was troublesome, they didn’t have nearly as many suited to the Mid-South. That changed with the 2011 outbreak.

“I think every seed company is working to have blight resistance in their lines,” Robinson says. “Before 2011, it wasn’t an issue in this part of the Cotton Belt.

Bayer, for example, already had blight resistance in many of its FiberMax varieties for West Texas, he says. Breeders were able to take that resistance and cross it with Stoneville varieties for the Mid-South to incorporate in the trait.

Within the past three years, Bayer has released a handful Stoneville varieties for the Mid-South with bacterial blight resistance, says Andy White, Bayer principle agronomist in Holcomb, Mississippi. And more are in the pipeline.

Nevertheless, choosing a variety with bacterial blight resistance may not be a high priority for growers, Allen says.

Robinson says he believes the level of bacterial blight damage in a field may influence a grower choosing to stick with a tried-and-true variety rather than a newer one with bacterial blight resistance.

“If a grower has blight on whatever percent of their acres but he doesn’t see damage or any other issues, is he going to look for a resistant variety to plant this year or just say, ‘This isn’t that bad?’” he says.

The Criteria Behind Variety Selection

MSU conducts OVTs, or Official Variety Trails, each year that involve dozens of different varieties at nine different locations in the state. Researchers rate each one on a number of factors, including yield, lint quality and loan value.

Although Allen says the varieties are a broad representation of the genetics available, most growers select only from among the very top yield-producing performers.

Graves agrees and says new herbicide traits also rank high in selection criteria. Adding in other variables, such as bacterial blight resistance, significantly reduces the pool from which growers can choose. Having walked fields devastated by bacterial blight, he says he wished growers placed more importance on resistance.

Tim Roberts, a consultant and partner in TennArk Crop Service in Dyersberg, Tennessee, says last season he saw bacterial blight in West Tennessee fields and even worse outbreaks in the Missouri Bootheel.

“We were looking really hard for target spot,” Roberts says. “We saw lesions that looked like target spot, but when we got it identified, it was bacterial blight. It was on the bottom most mature leaves and when it moved up three nodes, it was getting really scary.”

Then the rainy, cool weather turned hot and dry, shutting off further bacterial blight development.
“We got lucky,” he says, adding the solution is bacterial blight-resistant varieties.

Roberts says he also has recommended deep tillage to his growers, not just for bacterial blight management but also to break up compaction. But he says they typically don’t follow through.

Bacterial blight, also called angular leaf spot, is caused by the Xanthomonas citri pv. malvacearum. In seed infections, the pathogen enters the chalaza, or round end of the seed, where it can subsequently enter the embryo. The bacterium also can contaminate the seed surface or attached lint.

The bacterium also can hitchhike in on equipment used previously in infested fields. Once a primary inoculum source is established in a field, the pathogen enters cotton plants through natural openings such as stomates or through injuries created by equipment, personnel or wind. All of these are secondary sources of infection.

Bacterial blight starts as small, water-soaked lesions on the leaf underside. As it progresses, the lesions become angular leaf spots with red to brown borders. Under conducive conditions of prolonged leaf wetness and temperatures in the 80s, the spots increase in size and numbers, eventually coalescing. Eventually, petioles and stems may become infected. Severe leaf and petiole infection can lead to premature defoliation. Bolls also may become infected, resulting in water-soaked crater-like depressions that may result in boll rot from bacterial blight or from a secondary fungal infection.

As with many bacterial diseases, the earlier in the growth stage the plant becomes infected, the more severe the disease is likely to become. How much yield reduction it causes remains unanswered. Because the causal organism is a bacterium, fungicides are ineffective against bacterial blight, says Tom Allen, Mississippi State University Extension and Research plant pathologist. As such, one of the main ways to minimize the disease is to plant varieties resistant to the pathogen.