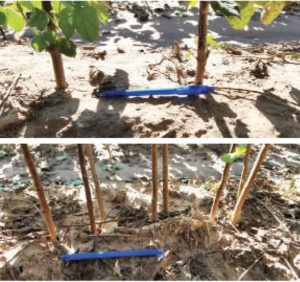 Stem diameter differences are shown among the lightest and heaviest, 1.7 seeds per foot (top) and 5.6 seeds per foot, planting rates in the cotton trial conducted by Dr. Emi Kimura.

New and returning cotton producers may want to carefully consider row spacing and seeding rates when they get ready to plant during the next few months, according to two Texas A&M AgriLife Extension Service agronomists.

“We have producers inquiring about continuing the practice of planting on narrow, 20-inch row spacing as a strategy to enhance maturity and yield with newer varieties,” Bell says.

On average, northern High Plains producers plant cotton using a seeding rate of 2.5 to 3.5 seeds per row-foot on 30-inch rows, she says. To maintain the recommended seeding rate per row-foot, planting populations increase as row spacing decreases. Increased seeding rates can result in increased inter-row competition that could affect boll and fiber development.

Stoneville 4747 yielded greater on all row spacings, with the greatest lint production being on 30-inch rows. The 40-inch row spacing yielded the lowest for both varieties.

Bell says although yields were lowest on the 40-inch rows, there were no significant differences between the final four-week plant stands on the 30- and 40-inch rows. This suggested differences were not the result of a greater number of fruit-bearing plants on the 30-inch spacing.

She says the trial will be repeated in 2018 and 2019 to obtain a three-year dataset necessary for evaluation of a management practice under varying environmental conditions. Results of the Hutchinson County row-spacing trial can be found on Page 41 of the 2017 Replicated Agronomic Cotton Evaluation, or RACE, trial results at http://bit.ly/2C7fDRD.

Kimura planted her seeding rate trial in 2016 and 2017, with the most recent crop harvested Nov. 17. She says traditionally, cotton producers in the Rolling Plains plant 2-2.5 seeds per foot for dryland conditions and 3-4 seeds per foot in irrigated cotton.

“We found the lower seeding rates seemed to produce the same amount of lint yield under favorable environmental conditions,” she says.

Over the two years, there were no differences among all seeding rates in the irrigated trial, but net dollars per acre were the highest at 22,216 seeds per acre in the dryland trial, Kimura says.

Although the low seeding rates may perform as well as higher seeding rates, she cautions they may be more susceptible to harsh environments such as hail, sandstorms and dry conditions. Results of Kimura’s trial can be found at http://bit.ly/2EEr5BR.

Kay Ledbetter is an associate editor/communication specialist for Texas AgriLife Research and Texas AgriLife Extension Service in Amarillo and Vernon.