Mechanical Delinting Of Cottonseed Has Promise 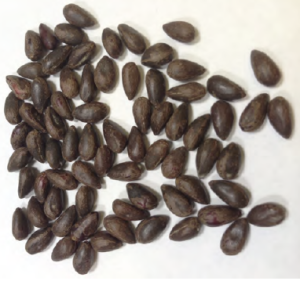 “It really helped ramp up demand for cottonseed by dairy producers and feed mills when they realized the handling issue had been solved,” says Tom Wedegaertner, director of cottonseed research and marketing for Cotton Incorporated.

“At one point, we had a commercial seed company partner evaluating the coating process for planting seed,” says Wedegaertner. “The coating process worked well. However, the residual tags and linters on the seed created an inconsistent product that could potentially plug a mechanical planter. This caused us to start looking for a mechanical process to delint the seed.”

Mechanically delinted cottonseed tends to have a slightly slower germination rate compared to acid-delinted seed, but there are techniques to improve the way the seed imbibes water. On the positive side, brush delinted seed seems to have an extended shelf life. This will provide seed companies (and cotton breeders) more control over inventory and research efforts. It’s also a more cost effective and environmentally friendly way to delint cotton seed.

Wedegaertner has been working with USDA/ARS Ag Engineer Greg Holt in Lubbock, Texas, on the project for several years. Initial designs included the use of belt sanders and other abrasive-related devices to gently remove linters, but the most promising design involves using a rotating drum. A “proof of concept prototype” patent was granted in 2012. One of the early successful prototypes utilized a clothes dryer fitted with heavy-duty brushes, which could delint seed in five-pound batches.

Seed produced by that prototype was used in field studies to determine whether brush delinting had the potential to replace acid delinting. A larger prototype machine (capable of delinting 150 pounds per hour) was used to produce enough seed for research on three center pivots.

Wedegaertner and Holt are looking into a variety of new brushes that may offer effective mechanical delinting with lower heat generation. Brush technology is definitely improving. Another positive about mechanical delinting is the economic advantage of baling up the linters – which right now are garnering a price around 20 to 30 cents a pound.

“You can generate around 150 pounds of linters from every ton of cottonseed,” says Wedegaertner. Linters are pure cellulose and can be used in everything from food products and high-end cotton writing paper to flat screen televisions and gun powder.

As a product’s sustainability becomes increasingly more important to consumers, Cotton Incorporated will continue to search for ways to improve the sustainability of cotton by developing innovative ways to produce the crop and capture more value from it.

The Cotton Board, which administers Cotton Incorporated’s Research and Promotion Program, contributed this article.