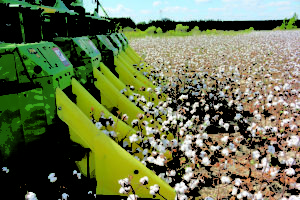 Despite a year with a multitude of challenges in the field, Alabama cotton yields are estimated to be the third highest in state history.

Cotton production for 2017 is up 18 percent from 2016 production. Alabama economist Max Runge says this increase stems primarily from a 25 percent increase in harvested acreage over 2016 (343,000 acres).
“Given the challenging growing year, cotton yields held up surprisingly well,” Runge says. “From the wet, cool spring to two hurricanes, some localized heavy rain events and an outbreak of white flies, Alabama growers still managed to have the third highest yield in history.”

At the end of November 2017, producers had harvested only 79 percent of the crop, 15 percent less than the 93 percent they had harvested at the same time in 2016.

Good Year For Alabama Crops
Cotton was not the only crop to prosper in the 2017 growing season; corn, peanut and soybean production numbers will likely top those from 2016.

“Overall, 2017 was a good year for yields for Alabama producers,” Runge says. “Corn, soybeans and wheat all had record yields, peanuts had their second highest yield history and cotton the third highest yields.

“Prices, on the other hand, will potentially be some of the lowest in almost a decade. Even with high yields, farmers have a challenging year financially.”

Corn yield forecasts are at a record- high 165 bushels per acre. Corn for grain production projections hit 38.8 million bushels. This projection is up 3 percent from 2016 with about 25 percent fewer harvested acres. Peanut production is forecast at 749 million pounds — down 7 percent from October, but 21 percent more than 2016 yields.

More Information
Cotton is the most valuable crop in Alabama, bringing in more than $234 million in 2016. The state also ranks sixth in U.S. cotton production. In 2016, Alabama farmers produced 706,000 bales of upland cotton and 207,000 tons of cottonseed.

Visit www.aces.edu and www.alabamacrops.com for more information on Alabama cotton.

Katie Nichols is with the Alabama Cooperative Extension System.