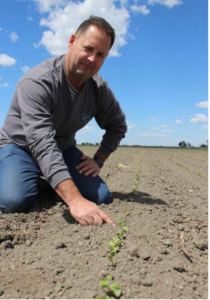 Joel Allen of Allen Farms in Firebaugh, who farms in the Westlands Water District, says he has been growing more cotton and fewer tomatoes every year for the past several years.

“Tomatoes take more water than cotton, and to be conservative, last year, we (netted) about $1,500 per acre in cotton versus $1,200 per acre in tomatoes,” Allen says.

Eric Fontana, co-owner of Brinkley Farms, operates in Dos Palos in an area that has early water rights and therefore more secure supplies than farmers such as Allen. But he too, due to stagnant tomato prices and what seems to be a higher demand for Pima cotton, has steadily been increasing his cotton acreage.

In 2008, Fontana had 550 acres of cotton and 200 acres of tomatoes. In 2013, he dropped his tomato acreage to 80 acres because of an oversupply of processing tomatoes and reduced prices. This year, he says he’s growing 863 acres of Pima cotton and no tomatoes.

During the past seven or eight years, the price for Pima peaked at about $2 per pound, Fontana says. Last year, growers settled on $1.45 to $1.50 per pound. Despite the price drop, he says, cotton seems a better bet than tomatoes.

“When I’m looking at my paid-for cotton picker, and I think of having to pay someone else to harvest my tomatoes, it doesn’t make a lot of sense,” Fontana says.

The other factor with tomatoes is weather. Because so many farmers rely on professional transplanters, if they have to postpone planting because of a cold snap, problems can arise.

With the low water allocations for 2018 — 50 percent for Central Valley Project agricultural customers in the San Joaquin Valley — Isom says some growers are dropping back, meaning somewhere between 250,000 to 260,000 acres of cotton will be planted in the region this year. About 205,000 of that will be Pima, he says.

The CVP initially announced allocations of 20 percent in February for south of Delta ag water contractors, but that amount was increased a number of times after snowpack runoff numbers started flowing in.

In a Prospective Plantings report in late March, the U.S. Department of Agriculture estimated California farmers would plant 312,000 acres of cotton this year, up 3 percent from 2017.

Isom says a number of cotton growers are switching to drip irrigation, so they’re able to use two and a half acre-feet to grow cotton instead of a full three feet.

Although cotton has fewer risks compared to tomatoes, every crop has its potential problems. With cotton, those include the threat of pests, such as lygus and aphids, which have gotten worse.

There’s also the risk of early autumn rains that can stain cotton. The good news for cotton growers is that new varieties of Pima have made it possible for farmers to harvest cotton two weeks earlier than usual, thus reducing the threat from early autumn rains.

In addition, most Pima cotton is Roundup Ready, reducing employment costs, and farmers say the quality of the cotton itself has advanced significantly.

“Aphids are probably becoming the biggest problem,” Fontana says. “Mills cannot accept any sticky cotton. With all the technology out there, we can’t have any traced back to the grower. If you have a contract, they can kick it back, and we can’t have that type of reputation for having sticky cotton in the valley.”

In terms of what’s going to happen to tomato acreage, Fontana says he isn’t sure.

“Tomatoes are just more susceptible to disease, and without lucrative prices, it doesn’t make sense to continue with them,” he says.

Lisa Lieberman is a reporter in Three Rivers, California. The California Farm Bureau Federation granted permission to reprint this article.