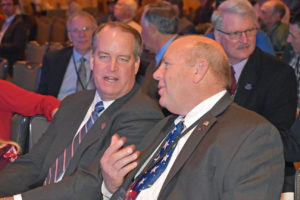 As the California Farm Bureau Federation begins its centennial celebration, CFBF President Jamie Johansson called farmers and ranchers to action, reminding them that Farm Bureau is an organization “that wants to go beyond making a statement by being determined to make a difference.”

He made his remarks during the 100th CFBF Annual Meeting in San Diego recently, where he outlined the organization’s priorities in water policy, resource management and fighting against regulatory pressures that hinder farming. These same issues would be familiar to the organization’s founders, Johansson says.

“A Farm Bureau member in 1919 was the same as today: not content merely to accept the current political landscape but insistent on making it better for farmers and ranchers,” he says.

What’s changed includes the “communication technology available to us that our predecessors could only dream of,” and the founders “would be impressed by the sophisticated way we seek to address those challenges through advocacy with elected officials, the courts and the media.”

Just as Farm Bureau delegates in 1919 envisioned the success of the organization would be based more on a grassroots and active membership than “a large, indifferent membership,” Johansson says today’s delegates from 53 county Farm Bureaus “will guide us into our 100th year with the collective wisdom and foresight required to meet the challenges of the future.”

Perhaps one of the most impactful actions taken this year involved nearly 1,500 farmers and rural community members who came together to rally at the state Capitol against a pending unimpaired-flows decision by the State Water Resources Control Board “attempting to use water quality issues to circumvent our water rights,” Johansson says.

“These are actions of California’s premier agricultural organization, that going on 100 years has shown its strength in numbers,” he says.

Farm Bureau is prepared “to continue defending water rights and shaping water policy in 2019,” Johansson says, adding “the strength of our water policy is the commitment to the idea that to meet California’s water needs, we do not need to sacrifice the water needs of one region over another farm community.”

CFBF will remain actively engaged in policy discussions involving other natural resources, Johansson pledges, pointing out that California’s scourge of wildfires has demonstrated that “if we do not manage our resources, they quickly become liabilities.”

Describing the state as being in “the business of big government,” Johansson says Farm Bureau would continue to fight back against expanding government regulations that hamper agriculture — just as it did 100 years ago. Though he doesn’t fault those who have left California for more business-friendly states, he says those who choose to stay will continue to fight to make things better for agriculture.

“That’s what ties us together at Farm Bureau,” he says. “It’s the understanding that what’s bad for an almond farmer is bad for a rice farmer.”

Despite the difficulties, Johansson says, “the opportunities have never been greater to farm and be in agriculture,” thanks to innovation, trade and access to markets.

“What we have to do as Farm Bureau is to show this state that what we do best is create wealth” that benefits everyone involved in agriculture, including farm employees and people who work in transportation, marketing and other jobs, he says, noting that “with water, sunlight, good soil and some knowledge, you can grow something and you can sell it.

“Those opportunities are what we defend every day,” he says.

Ching Lee is an assistant editor of Ag Alert. This article was originally published by the California Farm Bureau Federation.