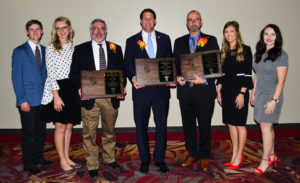 The awards recognize individuals for their contributions to various areas of agriculture. This year’s recipients are Ron Craft for agribusiness, Jodey Arrington for public service, and Shawn Holladay for agricultural production.

▶ Ron Craft: A cotton producer and fifth-generation ginner, Craft is owner of New-Tex Gin Company in Plains, Texas, and co-owner of Lov-Cot Warehouse in Lubbock. He was elected chairman of the National Cotton Council in 2018 and is active in many state and national farm and gin organizations.

Over the years, Craft has held numerous other NCC leadership positions, including director, chairman of the Packaging and Distribution Committee, and member of the Executive Committee, Cotton Flow Committee, and Quality Task Force. Honors for Craft include being named chairman of the National Cotton Ginners’ Association in 2017, after serving as president in 2016.

He is a member and past president of the Plains Ginners, Texas Independent Ginners, and Texas Cotton Ginners’ associations.

Craft is a graduate of the Texas Law Enforcement Academy and is a sergeant for the Yoakum County Sheriff’s Department.

▶ Jodey Arrington: The Plainview native currently serves as U.S. Representative for Texas’s 19th Congressional District. In Congress, he has been an advocate for promoting agriculture and energy, strengthening national security, and respecting the U.S. Constitution.

After graduating from Texas Tech, Arrington worked for Gov. George W. Bush in Austin, Texas, and was later selected by President Bush to join the White House as a senior advisor before being appointed as chief of staff to the Federal Deposit Insurance Corp.

In 2007, he returned to West Texas where he was vice chancellor of research and commercialization in the Texas Tech University System before being named president of a Lubbock healthcare innovation company.

▶ Shawn Holladay: A fourth-generation farmer who produces cotton in Dawson and Martin counties, Holladay is chairman and partner with United Gin Corp. near Lamesa, Texas.

He serves on the board of the National Cotton Council and is chairman of the American Cotton Producers, where he is an advocate for sound farm policy for cotton producers in the development of the 2018 Farm Bill.

He also has served as chairman of the American Cotton Producers Farm Policy Task Force, focusing on creating the newly established seed-cotton program for U.S. cotton producers. In addition, Holladay serves as one of the original founders and chairman of the Plains Cotton Growers Political Action Committee, a political action arm that provides a unified voice and advocacy for cotton producers in U.S. politics.

Holladay is also past chairman of Plains Cotton Growers, Inc. and is a past president of Lamesa Cotton Growers.
He received Cotton Grower magazine’s Cotton Achievement Award (2017), and was the Farm Press 2012 “High Cotton” Award winner for the Southwest Region.

The outstanding agriculturalist awards, established in 1969, are named for Gerald Thomas, who served as dean of Texas Tech’s College of Agricultural Sciences from 1958 to 1970.

Norman Martin is the director of communications and marketing at Texas Tech University.