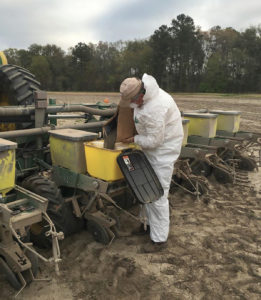 Protective gear is required while loading
AgLogic aldicarb at planting. In addition,
every rig should be calibrated each year
to ensure accurate application.

Root-knot nematode is one of the most costly and challenging pest problems in Southeastern row crop production. Common rotational programs that include cotton, soybeans and peanuts — which are all hosts for root-knot nematode — further complicate it.

One of the newest nematode weapons on the market is actually an old weapon – AgLogic aldicarb. Most growers remember it as “Temik,” which was most recently marketed by Bayer CropScience. Since Bayer pulled its support for the product and quit manufacturing aldicarb, it essentially had been unavailable to growers for about five years. Farmers essentially wrote it off as a viable option, thinking it would never come back.

When aldicarb emerged on the market again in 2016 under the name AgLogic, there was skepticism about the “new” product. Some wondered if it was really the same product with the same performance.

Eddie Sholar is a cotton grower in Leesburg, Georgia. He’s also a representative for R.W. Griffin in Douglas, Georgia, which sells AgLogic aldicarb.

“Growers were skeptical when aldicarb first came back,” he says. “In 2017, we started quite a few trials with AgLogic aldicarb comparing it with other products, such as imidacloprids. A lot of those trials were done in conjunction with growers who were also conducting seed trials. We started seeing more plant vigor just like the old days with Temik, along with the yield response we had seen with Temik in the past.

“When growers found out there was about a 100 pound increase in yield with aldicarb, suddenly they were very interested. This was especially true if they had just been relying on seed treatments followed by foliar applications. Treated seed was never a cure-all.”

Sholar uses aldicarb on his own operation.

“I put AgLogic under all my cotton last year,” he says. “In areas where I had a bad nematode problem, I increased the rate to 7 pounds per acre and also used a nematicide seed treatment. All my other cotton had 4.5-5 pounds per acre.”
It’s not all about nematodes, Sholar says. Early season thrips and aphids are also problematic.

“I’ve still got growers who plant base seed and spray acephate for thrips,” he says. “You can imagine in a bad thrips year how dinged up that cotton gets. A cotton seed that doesn’t have any protection from thrips gets really eaten up and torn up. It just takes a long time for the plant to come out of it.”

But it’s not just pest control alone. “Where we use aldicarb, I think we might get four or five days earlier maturity,” Sholar says.

“I think we get more than just thrips and nematode control. It stimulates growth and comes out of the ground quicker and stronger.”

Unfortunately, that didn’t matter much for the 2018 harvest.

“My cotton acres in 2018 were the biggest I’ve ever seen in my marketing area,” Sholar says. “We had rain all season long so the dryland was right up there with the irrigated. We had a great start to the growing season, but Hurricane Michael blew our 3-bale cotton away. In general, most growers went from 3-bale cotton to 300 pounds. We lost two and half to three weeks of harvest due to the hurricane.”

Despite the disappointment of 2018, Sholar says he is looking forward to 2019. Growers may have lost the battle in 2018 to the Michael factor, but there’s another war a’brewing.

“You don’t win every year,” he says. “You have to stay in the battle for the long term. I’m encouraged that we have some new options to fight root-knot nematode and other early season pest problems. In a time where it seems like our options are dwindling, it’s nice to have one that’s coming back.”