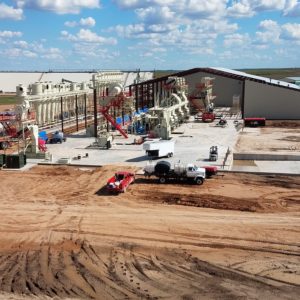 The number and sheer size of cotton gins in the north Texas High Plains continues to grow, fueled by burgeoning cotton acres.
Although the region doesn’t have the groundwater reserves it once had, it still has a better supply than the area to the south around Lubbock, which suffers from overdraft.

Corn, once the mainstay of the High Plains, is being slowly replaced by more water-efficient cotton in rotations. Thanks to higher-yielding, shorter-season varieties, cotton also can provide a higher potential return to growers during most years than traditional grain crops, says Darren Hudson, a professor of agricultural and applied economics at Texas Tech University in Lubbock.

“We’re well off our highs in the grains from a few years back, so producers have been looking for an alternative,” he says. “Instead of relying on corn or sorghum or wheat, which has been in the doldrums, growers are diversifying. Shorter-season (cotton) varieties have made it viable for them. Water restrictions are starting to bite a little bit in some areas for corn, so cotton is a little bit more miserly and you can get away with a little bit less water.”

The fact that producers are buying expensive harvesting equipment and investing in large gins also are signs of long-term commitment to cotton and the industry’s growth, Hudson says.

“In 1986, I remember first moving to Lubbock and seeing the traditional stripper varieties,” he says. “Now I see 4- to 5-bale cotton being grow in various areas of the High Plains. It’s gratifying and outstanding to see the strides we’ve made. All of the different (breeding) companies have improved yields, and more than just that, it’s the quality.

“I worked for two years in the San Joaquin Valley, and everybody knew California had top-notch cotton. Now cotton from any region in the U.S. is of sufficient strength, length and quality that it can be used in a multiple of applications. And it’s not just the breeding part. The quality of ginning, the new machines that have been introduced to the markets — we can gin at higher capacity without creating excessive fiber damage.” 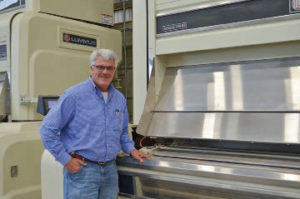 And nowhere is this new generation of machinery better exemplified than at Adobe Walls Gin in Spearman, Texas, billed as the largest ginning point in the United States and perhaps the world.

But Adobe Walls is not alone in growing to serve High Plains cotton growers. Lonestar Gin LP is building a $23 million gin plant project about 5 miles south of Pampa that can process more than 125,000 bales per year. It is scheduled for completion this fall.

And Ag Producers Co-op is building a new four-stand facility just outside of Spearman.

Several factors are driving the larger gins, with one of the more pressing being finding and keeping good workers, Rutherford says.

“When you’re competing in a place like Texas with the oil fields, we can’t pay those wages,” he says. “(Ginning) is a seasonal business. The oil fields are more year-round, and their pay scale is, in general, higher.

“Combine that with the technologies, and your year-round staff has to be higher-caliber from a technical standpoint. It’s not about down-time — it’s about up-time. Unless that gin is running efficiently and putting out bales consistently, it’s not going to be as profitable. It’s essential to maintain and optimize your up-time.”

When the original Adobe Walls Gin was completed in 2006, it was a 5 “Less 1” layout with four 170 gin stands and a production of 50 bales per hour, says Jerrell Keys, Adobe Walls general manager. The original plant was funded by about 20 local growers, each of whom purchased shares, as well as a large investment by Windstar Inc.

“It was state of the art,” Keys says. “For an individual plant, it was large. We just left that one line open, not knowing what the true growth potential was. Cotton was still a four-letter word to a lot of these corn growers.”

Spurred by continued expansion of the north Texas High Plains cotton industry, Adobe Walls Gin began construction of a new $14.5 million plant in late 2016 adjacent to the existing one. The new facility, a 6 “Less 2” configuration that included four 234-saw gin stands, came online in late December 2017 and was fully functional shortly after Christmas of that year. A new seed warehouse, which can store 30,000 tons of seed, also was built in 2017.

The expansion was funded by Windstar Inc., the original grower-investors as well as outside investors who purchased new shares. With a capacity to run up to 280,000 bales per season, Adobe Walls became the largest ginning point in the United States.

Two more 234-saw gin stands along with a second press were added in time for the 2018 season, increasing the new plant’s capacity by about 50 percent. So the Adobe Walls complex can now produce around 400,000 bales annually.

In spring 2018, Adobe Walls Gin also hit another milestone — it ginned its millionth bale of cotton.

The seed warehouse was built in 2018 as part of construction of Ag Producers Co-op’s new gin near Spearman, Texas.

Lonestar Gin LP broke ground on a new gin near Pampa in fall 2018, and construction should be finished by September, says General Manager Carey McKinney.

Although the facility is new and not an expansion of an existing gin, McKinney says several area gins and growers are investors in this one.
Much like elsewhere in the Texas High Plains, increased cotton acres were behind the new Lonestar gin.

“It’s just mainly the acres north of I-40 that are going more into a rotation of corn to cotton,” McKinney says.

The facility, which will feature six 234-saw gin stands and two presses from Lummus, will be able to produce more than 125,000 bales per year.