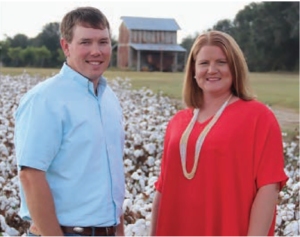 In 2010, Preston and Kendall Jimmerson were pondering their future. Preston was a four-year insurance agent with Lee County, Georgia, Farm Bureau. But farm life had caught his attention.

Kendall grew up on Moss Family Farm, then owned by her father, Rick Moss. Preston talked with his father-in-law and told him he’d like to try farming if Rick ever wanted to retire. Preston’s expectation was this was something to be addressed far in the future.

“I basically just said I’d really like to be outside. I would like to farm. I don’t want to be in business indoors the rest of my life,” Preston remembered. “He said, ‘Today’s the day. We’re going to set this up. You’re going to start right now.’”

Kendall, having grown up on the farm, had a clearer view of what this meant.

“I was scared,” she said. “Very,very terrified. I grew up on the farm and moving away was a big deal. Inside, I wanted to raise my kids here. I wanted to come back, but I never thought I would.”

Preston viewed the move as an adventure. He had married into a farm family also known for its commitment to the sport of diving. Rick’s father, Robert “Moose” Moss, started Moultrie’s renowned diving team. He built a diving facility on the farm, learned the sport and taught local youth.

Though Preston didn’t grow up on a farm and had limited knowledge of farming, he jumped in with both feet. He and Kendall have continued kicking away from the side of the pool and been successful.

Preston resigned his job as an insurance agent and began farming part time with Rick in May 2010. Part time, because both agreed Preston should study agriculture. He enrolled at Abraham Baldwin Agricultural College in Tifton, Georgia, and by 2012 had earned a bachelor’s degree in diversified agriculture.

On Jan. 1, 2013, he took over the farm and Rick retired. The Jimmersons would rent the land from him, purchase all his equipment and assume all financial and operational risk for the 2,400-acre farm.

“I give him all the credit in the world,” Preston said. “There’s hardly any operation that transitions the way we did. His mentality has always been that you can only have so many mouths eating out of the same pie. He knew that in order for us to be able to make it, to be able to invest in the farm and grow it, he had to be out.”

So the Jimmersons took out U.S. Department of Agriculture loans and moved forward. Preston said he and Rick occasionally talk about farm topics, but conversations about crop decisions don’t happen.

As the state winner, the Jimmersons received $500 cash, a four-seat John Deere ATV with trailer, a year’s use of a Kubota M Series tractor and an expense-paid trip to the AFBF convention. The runners-up received $500 cash.

Article by Georgia Farm Bureau News reporter Jay Stone. It is reprinted with permission from the 2019 November/December GFB News.