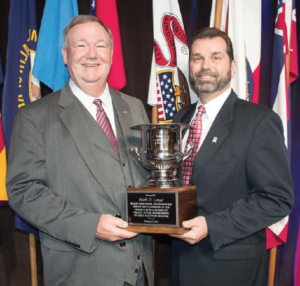 The award, named for the late California industry leader and past NCC President Harry S. Baker, is presented annually to a deserving individual who has provided extraordinary service, leadership and dedication to the U.S. cotton industry.

In presenting the award, outgoing NCC Chairman Shane Stephens says that during Lange’s tenure as the NCC’s CEO and through his leadership, the NCC secured favorable cotton provisions in a succession of farm bills, successfully addressed a number of critical trade issues, reduced operating costs while moving the NCC to a more modern and efficient headquarters, and achieved record levels of membership support and leadership involvement.

“Like the Council CEOs before him, Mark Lange maintained the Council’s position as our nation’s premier commodity organization while successfully meeting every challenge before our industry,” Stephens says. “Mark left the Council in an outstanding position to continue its work and programs of unparalleled service to the U.S. cotton industry.”

Stephens also noted that NCC-managed programs as well as the organizations under its umbrella – the export promotion arm, Cotton Council International, the Cotton Foundation and the National Cotton Ginners’ Association — all flourished under Lange’s leadership.

Prior to being named president/CEO, Lange served as the NCC’s vice president for policy analysis and program coordination. Before that, he was director of the NCC’s Economic Services and Information Services departments.
Lange earned a bachelor’s and a master’s degree in Economics from Indiana State University and received a Ph.D. in Economics from Iowa State University. He and his wife, Janis, have a daughter, a son, and four grandchildren and are active in Emmanuel United Methodist Church in Memphis, Tenn.