Tim Roberts grew up in Southeast Arkansas where farming was prevalent and many of the local teenagers worked as cotton scouts or “bug checkers” as they were called at the time. In 1977, Arkansas cotton consultant Ken Gilbert hired Roberts and Roberts’ long-time friend, Billy Beegle, to work for him while they were in college. From 1980 to 1983, Gilbert sent the young men to West Tennessee where farmers were looking for consultants to help combat the boll weevil, which had begun to aggressively attack their cotton fields.

(A PDF of this article is available here.)

In 1984, Roberts and Beegle moved back to Arkansas and went into partnership as TennArk Crop Service. As their acres increased in West Tennessee, they moved the business to Dyersburg in 1992, where they still operate today. They also consult in the Missouri Bootheel, primarily in Pemiscot and southern New Madrid counties.

In 1984, Roberts and Beegle moved back to Arkansas and went into partnership as TennArk Crop Service. As their acres increased in West Tennessee, they moved the business to Dyersburg in 1992, where they still operate today. They also consult in the Missouri Bootheel, primarily in Pemiscot and southern New Madrid counties.

“Billy and I grew up together in McGehee, Ark., and even went to the same church,” Roberts says. “Back in the early days, we worked out of one truck while we were building our business. Of course, we now work out of two trucks, report to one another after we finish scouting, and then report to the farmer whose fields we were checking. It’s pretty rare for two guys to get along in the type of business we have, but it works for us. We complement each other. Billy and I have been with many of our farmers for more than 30 years and now work for some of their sons. They all consider themselves ‘cotton farmers’ and want to continue growing cotton. Some years are more challenging than others, but the job is never boring. It’s intense, and we learn something new all the time.”

And that intensity is not lost on the cotton producers for whom Roberts consults. Patrick Turnage, who primarily farms in the Missouri Bootheel, says, “I was 13 years old when Tim began consulting for our family. He has single handedly instilled in me a passion for perfection — a ‘leave nothing to chance, do all we can’ attitude — and then leave the rest to Mother Nature. This is what it takes to be successful in today’s agricultural environment.”

Jimmy Moody, president and farm manager of Moody Properties Inc. and managing partner of Cold Creek Farms in West Tennessee, says, “Tim is a very detailed person, takes ownership of the crop and never gives up. We had a dryland farm this past year that experienced a lot of stress. It was probably the most challenging farm he had dealt with in his career. At one point we were both discouraged, but Tim nursed it though the season. At harvest, that farm made over 1,200 pounds per acre and were the best grades we had.”

Long-time client and friend Gary Hayes, who farms with his brother in Pemiscot County, Mo., and manages Caruthersville Gin, describes Roberts as a man who takes pride in his work and acts as a motivator, too. “Tim always shows interest, wants his farmers to do well and checks back in a timely manner after making a recommendation. I get my scouting report on Monday and on Tuesday afternoon he calls to make sure I have followed through with what needs to be done. As farmers, we are all lucky to have him scouting for us. Tim and Billy together do a great job.”

Tim Roberts is all about teamwork and communication. He and his partner, Billy Beegle, tag team their farmers’ fields and report to each other throughout the day. They employ three young full-time consultants — Kyle Jackson, Logan Parker and Zach Hardin — to round out the roster.

Roberts also appreciates the informal fraternity that exists among professionals in his industry.

“We all know how tough it can be,” he says. “We’ve all stood out in the field, seen something going on and thought, ‘What in the world am I going to do?’ One of my first reactions is to pick up the phone and call my consultant buddies to get their take on it. Consultants are great when it comes to sharing information, their own experiences and what they think you ought to do. And many times it’s just the moral support that helps. In our business, we constantly communicate with our farmers and with each other.”

Other important “team members” with whom Roberts regularly consults include university personnel, industry representatives and distributors. “We get together at meetings during the winter, participate in plot work and know that during the season, they are just a phone call away. Our relationship with all of these people is very beneficial.”

Upon learning he was selected as the 2016 Cotton Consultant of the Year, Roberts says he was humbled and honored.

“I had pulled down into a 150-acre field called Grandma’s Home Place when I got the call,” he says. “I began to reminisce about all the fields I have checked, the farmers I’ve scouted for, everything Billy and I have been through in growing our business and the amazing varieties and crop protection chemicals we have today. We are all very fortunate.” 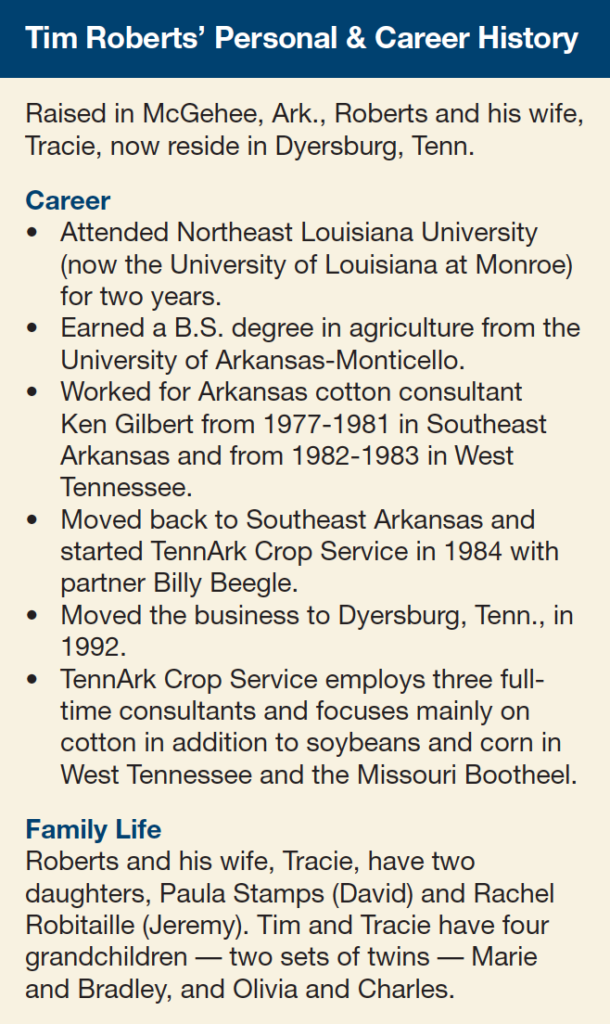 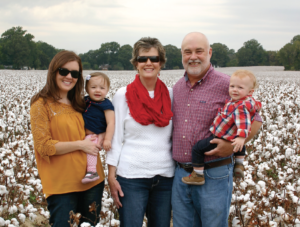