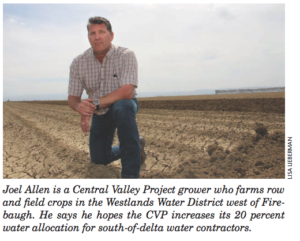 Reservoirs are at or above average storage levels, and the Sierra Nevada snowpack is improved by storms in March and early April. However, farmers await word from federal and state water agencies about whether water allocations may improve.

During a winter in which the snowpack reached only about half of average levels, both the federal Central Valley Project and the State Water Project told most of their agricultural customers in January to expect 20 percent water allocations this year.

‘Not A Good Situation’

Meanwhile, Joel Allen, a CVP grower who farms row and field crops in the Westlands Water District west of Firebaugh, says the low allocation and lack of certainty from year to year “is a far cry from where we need to be.”

Though he and other growers can carry over a percentage of water in their accounts from last year, Allen says that won’t be enough. He believes he will have to purchase expensive water on the open market to supplement whatever supply he receives.

“I’ve been dealing with this for 20 years and it’s to the point where I’m about ready to raise the white flag, but we’re fighters,” Allen says.

Allen, who grows grains, cotton, cantaloupes and dryland crops, says one of his biggest challenges this year was securing financing.

Some of his neighbors have put in deep water wells, but Allen says, “I haven’t done that yet, because I’ve been on a financial limb, and I don’t want to continue breaking that branch.”

Jim Jones, who farms near Orland, says the initial 20 percent allocation water contractors received puts growers in a “holding pattern,” limiting them from moving forward with planting and settling contracts with processors.

Jones also works at Tri Counties Bank, handling agricultural accounts, and says given the current water situation, he must ask growers interested in loans about their budgets, including water source, allocation and access to surface water. He says an increase in the CVP allocation would be “a welcome relief and would ease stress, and likely add more water orders for our water district and lower the cost of our water.”

In Kern County, Jason Giannelli, general farm manager at his family farm in Bakersfield, purchases water from two districts: one that receives water from the State Water Project and another with a mix of state and CVP supplies.

“Everything is up in the air, but we’ve got to continue with our plan of planting our crops,” Giannelli says. “We’re able to make it work because we do have wells that supplement, but we’re also stretched thin because our water schedule is going to have to be just right on time.”

A grower of permanent, row and field crops, he says he expects to fallow about 300 acres that would have been planted to cotton and corn.

A representative of the State Water Project, California Department of Water Resources Chief Deputy Director Cindy Messer, told the state agriculture board meeting that “we do anticipate that our allocation numbers will go up.”