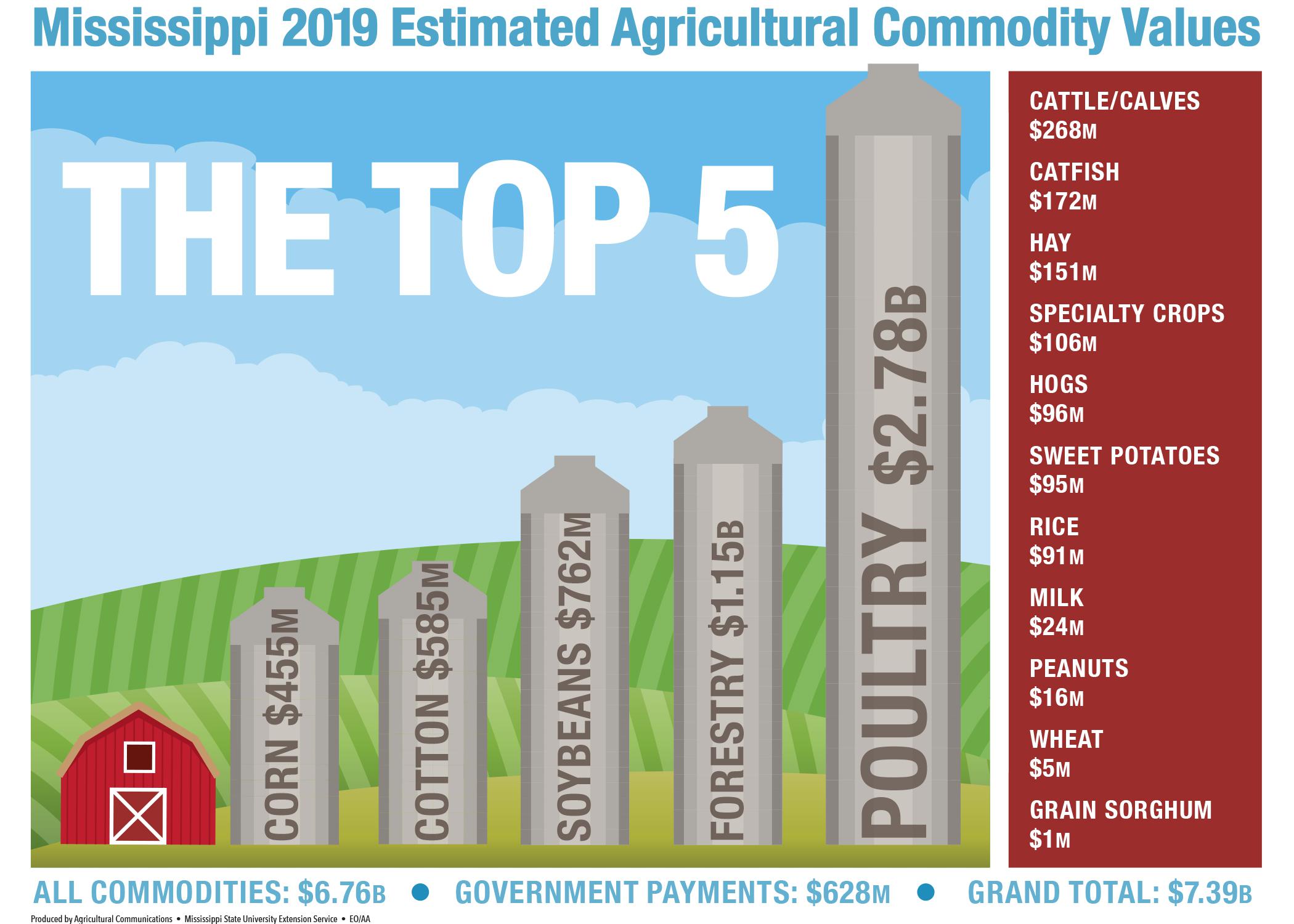 In 2019, Mississippi’s agricultural industry faced the prospect of dipping below $7 billion for the first time in eight years, but federal payments pushed its value up enough to post a slight gain over 2018.

The estimated value of Mississippi agriculture in 2019 is $7.39 billion, a 0.2% gain from last year’s $7.37 billion. Included in the total is an estimated $628 million in government payments, the largest amount of federal assistance Mississippi producers have seen since 2006.

The total value not including those payments is an estimated $6.8 billion. 2011 was the last time total values prior to government payments were below $7 billion.

“Government payments such as Market Facilitation Program payments are meant to mitigate farmer income losses due to the trade war with China,” Coble said. “The 2019 program is based on national commodity price changes estimated to reflect market losses and the county aggregate crop mix in 2019. Cotton and soybeans had the largest relative losses for 2019.

“County payments range from $15 to $150 per acre. Variation across Mississippi counties is largely driven by the relative percentage of cotton grown in the county.”

The commodity group with the most fluctuation was row crops. At an estimated $2.3 billion, overall totals were down 6.5% from 2018. Most notably, corn vaulted 39% from last year, while soybean values dipped 27%.

“The U.S.-China tariff standoff had a major impact on crop markets and production this year,” said MSU Extension Service row crop economist Will Maples. “Coming into the planting season, price signals were not very favorable to plant soybeans as the harvest month futures contract price hovered around $9 a bushel. The low price of soybeans was due to our trade issues, which made corn and cotton the more attractive crops to plant this year.”

Soybeans were still the most profitable row crop despite the standoff and reduced acreage. Production values fell to $762 million in 2019 after eclipsing $1 billion last year. Producers planted fewer than 2 million acres of the crop for the first time since 2012.

Cotton growers had a strong crop this year, planting more than 700,000 acres with average yields of 1,082 pounds per acre. However, lower cotton prices offset increases in the value of total production that would typically follow. The estimated total production was about $585 million, an increase from last year of about 1%.

Maples said cotton acreage was up 95,000 acres this year.

“The drop in cotton price was not directly tied to the trade war with China but a symptom of it,” Maples said. “Due to low soybean prices, the U.S. overall planted a lot more cotton than the market expected, and the extra supply dropped prices.”

The value of corn production was the highest it has been in six years, checking in at nearly $455 million thanks to a 160,000-acre increase in acreage and slightly better market prices than last year.

Hay is expected to have nearly $151 million in value this year, which is a 25% increase. Rounding out the top five in row crop production was specialty crops, which held steady at nearly $106 million.

Sweet potatoes were a $95 million industry despite falling 11% from 2018. This crop outperformed rice, whose value fell 19% from last year to about $91 million.

Peanut production in Mississippi was worth $16.3 million this year, while grain sorghum values were slightly over $1 million.

Percentage-wise, the row crop seeing the largest production decrease was wheat. The estimated $4.8 million total is almost a 33% drop from last year.