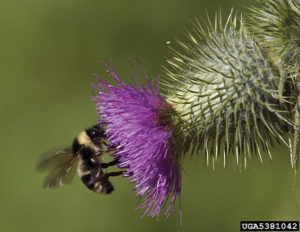 The Western bumblebee is one of two insects ag groups say the California Fish and Game Commission overstepped its authority in naming as candidates for listing under the California Endangered Species Act — Allan Smith-Pardo, Bees of the United States,
USDA APHIS PPQ, Bugwood.org

Seven agricultural associations have sued the California Fish and Game Commission and the California Department of Fish and Wildlife over the commission’s decision to name several bumblebee species as candidates for listing as endangered or threatened under the California Endangered Species Act.

The lawsuit centers on whether insects can be protected under the state ESA.

The law itself defines candidate species as “a native species or subspecies of a bird, mammal, fish, amphibian, reptile or plant that the commission has formally noticed as being under review by the department for addition to either the list of endangered species or the list of threatened species, or a species for which the commission has published a notice of proposed regulation to add the species to either list.” A 1998 attorney general’s opinion on the matter states that “insects do not fall within any of these categories.”

Nevertheless, a petition from several environmental groups asked the Fish and Game Commission to list the bumblebees, citing agricultural and livestock activity, increased use of crop-protection materials and competition with managed honeybees as among the reasons the bumblebees need protection. 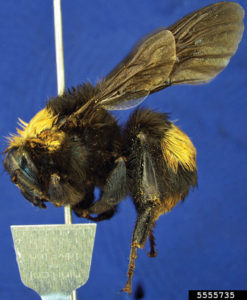 The Crotch bumblebee is the other insect proposed for listing — David Cappaert, Bugwood.org

That petition also lists proposed remedies that would harm farmers and ranchers, the farm organizations’ lawsuit states, “including permanently leaving farmland untilled, restricting grazing, restricting herbicide and pesticide application that is otherwise lawful, and prohibiting the use of commercial honeybees to pollinate crops such as blueberries, cherries and almonds.”

A major issue is whether the bees, as insects, are even eligible for listing in the first place, says Noelle Cremers, a California Farm Bureau Federation policy advocate. CFBF is one of the plaintiffs in the lawsuit.

“This all hinges on whether or not bumblebees are fish,” Cremers says.

That might sound strange, but Cremers was being quite serious — because the commission has tried before to list insects in such a way.

The lawsuit cites as precedent the commission’s attempt to list two butterfly species as endangered in 1980 using the following reasoning:

• The definitions of endangered and threatened species expressly include fish.

• Section 45 of the Fish and Game Code expressly defines “fish” to include invertebrates.

• Insects can be listed.

The Office of Administrative Law rejected the argument, the lawsuit states, and the commission backed off.
The agricultural groups’ lawsuit contends the commission therefore overstepped its authority this year in naming the Crotch bumblebee, Franklin’s bumblebee, Suckley cuckoo bumblebee and Western bumblebee as candidates for listing. The suit asks the court to order the commission to vacate its decision.