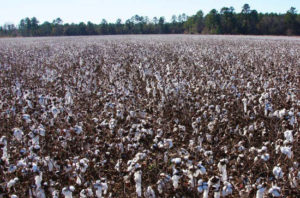 Hurricanes, a government shutdown and trade combined to create a tough year for South Carolina cotton farmers in 2018. But reports during the South Carolina Cotton Growers Annual Meeting show steps are being taken to help farmers rebound this season.

“We still have a lot of cotton in the fields,” says Michael Jones, Clemson University cotton specialist. “It’s gotten to the point where farmers may not even worry about it and just let it stay in the fields.”

Statistics from the U.S. Department of Agriculture National Agricultural Statistics Services show about 300,000 acres of cotton were planted in South Carolina in 2018. Hurricanes Florence and Michael arrived during harvest, drowning the state and forcing farmers out of their fields.

“It was tough harvest season for sure,” says Carl Brown, cotton farmer and chairman of the South Carolina Cotton Board.

In addition to hurricanes, farmers have been affected by the government shutdown, which kept government workers away from their offices and unable to assist growers.

South Carolina Commissioner of Agriculture Hugh Weathers says deadlines for farmers to apply for payments under the Market Facilitation Program have been extended. The shutdown began Dec. 22, 2018, causing a lapse in federal funding. It ended on Jan. 25.

ADVERTISEMENT
The deadline for the program was Jan. 15, but farmers were unable to apply because lack of funding closed Farm Service Agency offices on Dec. 28. The deadline will be extended for the number of business days FSA offices were closed.

Despite the trying year in 2018, 2019 is looking better. Nathan Smith, Clemson Extension agriculture economist, says he is encouraged by this year’s outlook. Farmers in North Carolina, South Carolina, Georgia, Alabama, Mississippi, Arkansas, Louisiana, eastern Texas and Southern Oklahoma are expected to plant 14 million acres of cotton with the potential for a 23 million-bale crop in 2019.

“Based on what I see, cotton is set up to do well in 2019,” Smith says. “If we produce as much as expected, we’ll need to increase our exports.”

In an update on cotton varieties, Jones says new lines are being bred to increase fiber length and strength. Controlling insects is also important.

Greene says plant bugs and whiteflies could be more of a problem in the state in the near future. In addition, he also talked about cotton leaf dwarf virus, also known as blue disease. This is a new virus transmitted by cotton aphids that could be extremely important in fields infected with the pathogen.

Meeting participants heard about other projects researchers from the Edisto Research and Education Center are conducting to help make crops more productive for South Carolina farmers. Joe Mari Maja, a research sensor engineer, talked about how he and his team are studying how to build a more affordable harvester that will help farmers reduce labor costs.

In another research report, Michael Plumblee, Clemson Extension precision agriculture specialist, discussed research being conducted in the Mid-South to determine the effect of droplet size on cotton defoliation. Preliminary data suggest that specific combinations of harvest aids, carrier volume and droplet size could reduce the overall efficacy of defoliation rather than improving it.

“This system maximizes profitability and helps farmers be better stewards of the environment,” Kirk says.