Southern cotton ginners know how to adapt to changing market conditions. In fact, you might say that they have rewritten the book on this topic in the last few years.

That “flexibility” was a major topic of discussion at the Southern Cotton Ginners Association’s recent summer meeting in Branson, Mo. In short, because of changing acreages for cotton, corn and soybeans, Mid-South gins continue to adjust to a completely new environment.

In addition to having fewer cotton acres in the region, ginners have had to deal with a new farm law, increased cotton stocks, fluctuating cotton prices, competition from grain crops as well as China’s unpredictable policies.

“This has made for a challenging situation for our Mid-South cotton producers and ginners,” says Tim Price, executive vice president of the Southern Cotton Ginners Association.

“I have to give our group a lot of credit for dealing with so much change in the last few years.”

Full Agenda Of Speakers
It is understandable that the agenda for the summer meeting addressed what ginners are currently facing. Some of the key speakers offered the following comments: 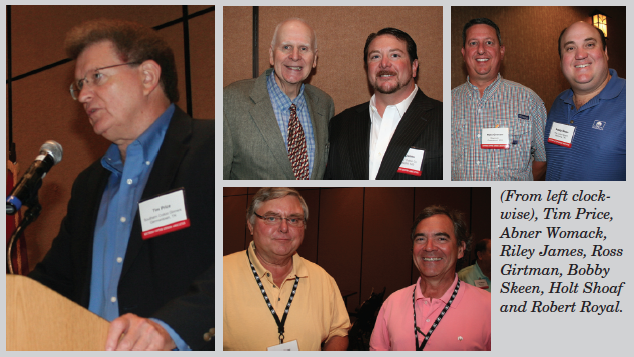 Too Much Cotton
Tancredi also says there “is simply too much cotton in the world right now.” He says a slight rebound in consumption would help in recapturing U.S. cotton demand. But he expressed frustration because no outside observer can accurately say what China’s next move will be because nobody knows what the country’s policy really is.

Finally, Tancredi urged ginners to remain vigilant in preventing contamination of U.S. cotton. “Our industry has a reputation for the best quality cotton produced in the world,” he says. “But we continue to receive reports of contaminated cotton, and we have to do a better job.”